Summer's Far From Over 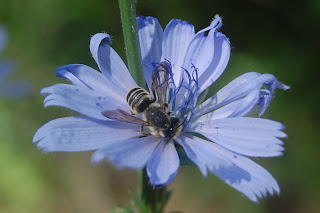 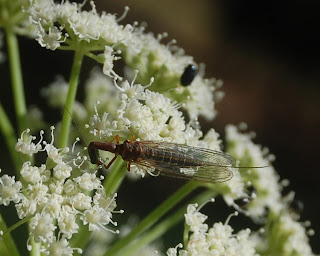 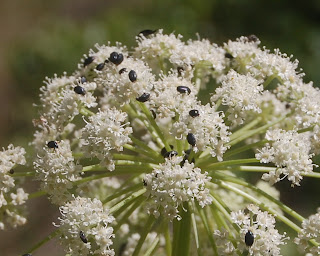 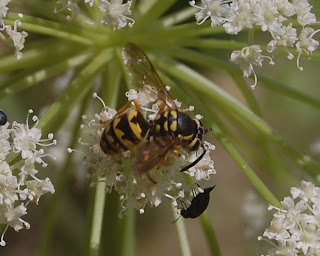 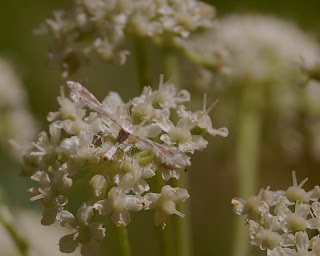 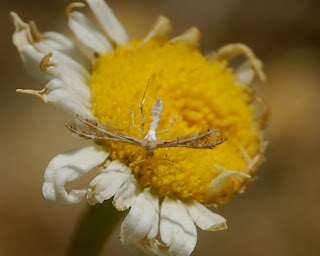 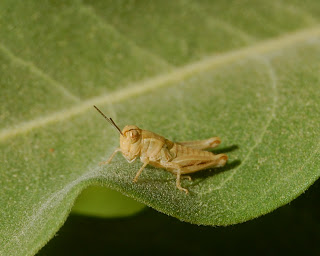 On yesterday's post, I explained how I set out on a walk not expecting to find much in the way of blooming flowers or flower-visiting bugs.  I was wrong.  Here are 8 more shots of insects I found on flowers in and around Oakland Camp yesterday morning.
Top photo: Hover Fly on Chicory.  The Chicory bloom for a long time, so they will be one of the last insect way stations to wilt and go to seed.  I haven't seen a great variety of insects landing on Chicory, but the various bees and bee mimics always look handsome over the blue background of the flowers.
Next is a Snakefly and some tiny beetles on a cluster of Brewer's Angelica.  The patch of Angelica I found yesterday was hosting a lot of activity by a variety of insects and spiders.  In the next photo, taken of the same plant, is some sort of "true bug" hanging upside down.  Then, the same plant with dozens of those little black beetles.  I'll have to get a microscope one of these days.  I think I'm missing a lot by not getting even closer to my subjects.  Next is a Plume Moth resting on Angelica.  Nearly camouflaged, it shows up a bit better in the next photo where it's resting on a dried up Daisy.  Last, a tiny Grasshopper who thought he was hiding on a leaf of Showy Milkweed.
I did get a few nice photos of flowers without bugs on them.  Saving those for my next post.
Posted by Joe Willis at 1:26 PM