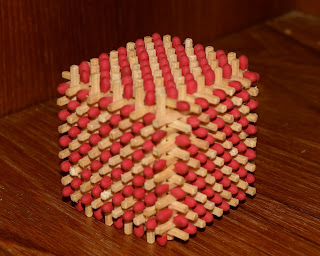 This morning, in our cold house (waiting for chimney repair), I walked by one of our bookshelves and spotted my son's art piece, 300 matches linked without the use of any adhesive.  My first impulse was to chuckle at remembered "got a match?" jokes.  Then I got a more serious feeling about things we take for granted.  I read a couple of online histories of the development of matches.  Now I think discovering how to make matches ranks right up there with the paper clip as one of the great, under-appreciated inventions of Homo sapiens.  I was on my way outside with these thoughts when I 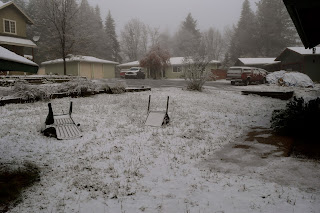 slipped on our icy front steps.  I took my sense of balance for granted, then had a painful fall.  Just in case it never snows again, at least during the Trump administration, I went back inside to get my camera to take a picture of our first snow that might last a day or two. 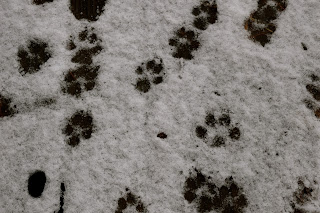 Looks like our young lab doesn't take the snow for granted.  When let outside, he went nuts, jumping and spinning and rolling.  Like any kid, he soon wanted to come back inside where it was warm - at least warm to him.  It'll be about a week before our stove chimney gets fixed, so it seems rather cold to me.  Solution?  Put on warm clothing.  Duh! 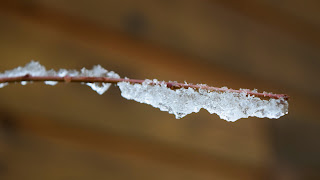 I wandered around outside for a while, hoping to find some amazing, aesthetically exciting frost crystals, but these two photos of shrub branches were the best I could do.  Even the frost on my truck's windshield was uninteresting. 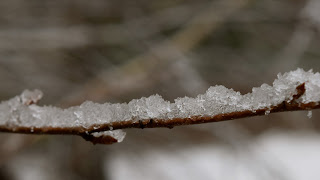 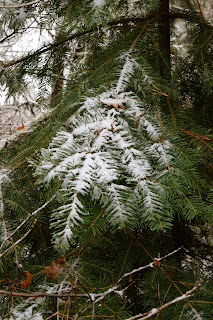 Before giving up on photography for the morning, I circled the house once and found this attractive, frosted brach of White Fir off the back deck, and then decided to post one more photo of the Camel Cricket that will hopefully spend the winter in my woodpile. (See previous two blog entries.) 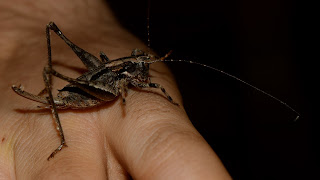 Posted by Joe Willis at 1:25 PM No comments: 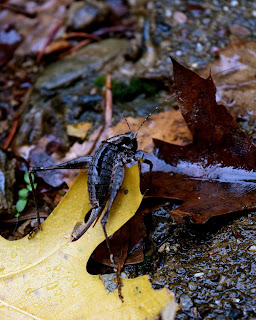 The deciduous leaves had mostly fallen, the air was cold, and I had started stacking my firewood when I uncovered a Camel Cricket.  There must have been some heat generated by decomposing leaves because this cricket was very alert and jumped over three feet.  However, like certain cats and snakes, once caught and held it calms down and seems to trust its captor. 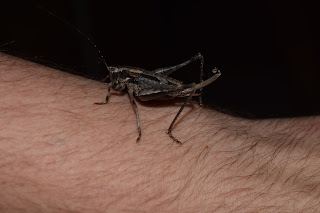 My son and I played with this one a little before returning it to the wood pile.  My mind wandered to all the critters hibernating, or just remaining dormant inside crevices, beneath the surface leaves, or even inches to feet below the surface.  I thought of the Oak Treehoppers that were clinging to branches only a few days earlier, but whose eggs and larvae will spend the winter inside the root systems of the oaks, only to emerge again toward the end of next summer.  I took these photos a month ago, but I was reminded of them - as they lay dormant in m computer - when I photographed various fungi and lichens this past Thursday.  Most of the fungi take advantage of other species' death by springing to life and helping with decomposition.  The lichens, living mostly off air and water, live on lifeless substrates like rocks and on tree bark among other places.  The ones that live on relatively permanent substrates, like granite, or the bark of oaks, may live for centuries.  The ones that live on softer bark, like that of pines and firs, and on softer rocks, might live only a year or two or a few decades.  They tolerate extreme cold and live through winters buried under snow and ice. 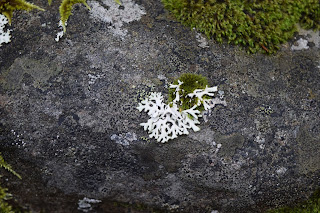 I hope this camel cricket has the tenacity to live through the winter in my wood pile.  I'd like to see it again next spring. 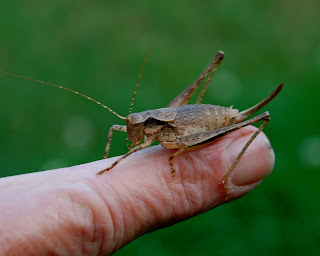 Posted by Joe Willis at 4:10 PM No comments: 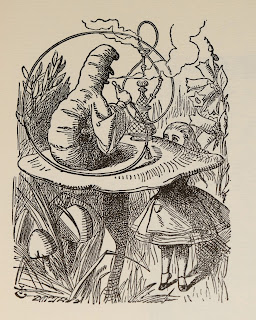 Well, it's been nearly four months since my last post.  This morning's experience gave new meaning to an old phrase "use it or lose it."  I nearly forgot how to log into my blog and how to produce a new post.  It will be hard to write a more or less linear text when my thoughts are spreading everywhere - like a fungus.  Fungi are one of the themes here.  The interesting thing, to me, is that it was this old John Tenneill drawing from Alice in Wonderland motivated me to resurrect my blog.

In one of my English classes at the college, we are studying censorship.  The students will be assigned a research paper on the subject.  For starters, we have been discussing why so many literary works appear on both "greatest books ever written" lists and "works most often censored" lists.  Lewis Carroll's great works are prime examples.  I wonder to this day if my grandmother's gifts of Alice and Through the Looking Glass are responsible for my life-long and still-evolving maverick approach to all school subjects and my attitudes about most of what we call pubic education.

When Carroll composed the scene of Alice in conversation with the caterpillar, I wonder if he intuitively knew that we would eventually discover that the fungi are more closely related to animals than to plants.  When I first read this in first grade, I didn't know what a hookah was except that it was obviously the smoking device the caterpillar was using.  I already knew smoking was unhealthy and was never really tempted, even during those prime years when most young people get hooked.  I knew nothing of psychedelic experiences.  However, I had a vivid imagination, and often imagined myself being of different sizes, strengths, and in different relationships to my surroundings - parents, friends, enemies, teachers, etc. I look back on those early years with fondness - years when grandma gave me many books I was not ready for - the poetry of Longfellow, novels of Robert Louis Stevenson, novels and poetry of Kipling, etc.  Grandma believed in challenging young people - an educational process now tantamount to child abuse in some areas.  I'll have much more to say on this subject in what I hope will be a serialized narrative on my life-long relationship with education as a student, a parent, and a teacher of students from elementary through college levels. My tentative operating title is I'm glad I never went to kindergarten.  For now, let's look at what I did on Thanksgiving morning. 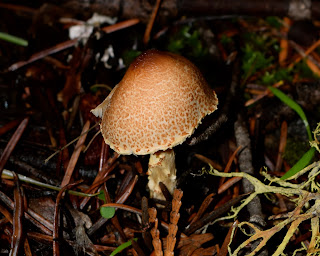 Following a tip from my local car insurance agent, I went out to the Keddie Cascade Trail.  Rick said there was an amazing variety of beautiful fungi erupting.  I hadn't been out that way for quite a while, and I was not disappointed - well, not much.  I'll play it fast and loose with terminology here, which may not please any professional mycologists who are reading this.

When I was a kid, we'd play Twenty Questions on rainy days.  The first question was always "animal, vegetable, or mineral?"  Back then, fungi were plants, and no one ever thought of fungi during that game anyway.  Well, fungi are no longer plants.  They are Fungi.  And there are plenty of kids today who know that not every tangible object is necessarily animal, vegetable, mineral, or fungus.  Take lichens for example, which many people incorrectly call moss, and which in any case are a symbiotic pairing of algae and fungi.  Miscegenation, perhaps? 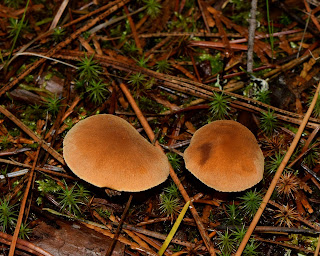 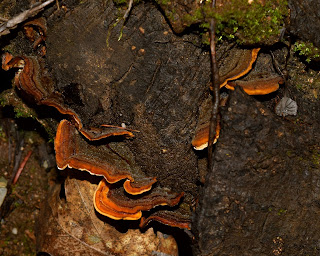 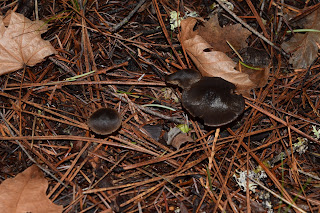 Black fungi that looked metallic in the available light. 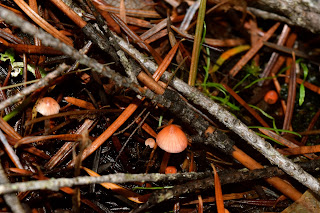 Tiny, bright red fungi. Less than a quarter inch in diameter.  Look at Douglas-fir needles for scale.  They are around 1 1/4" long. 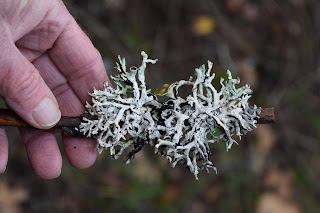 A lichen growing on a fallen branch of Douglas-fir. 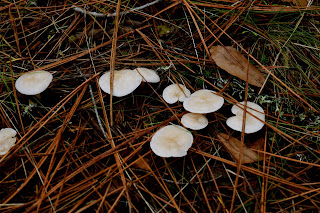 Bright white cluster of fungal caps.  Very difficult to photograph (for me).  White noise.  Hopefully, you can see a little texture. 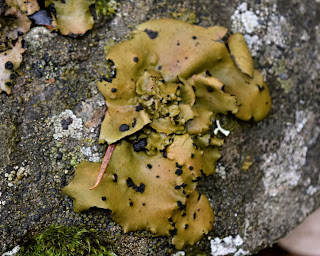 Not sure about this one.  A lichen, or possibly a liverwort.  I'll research this one later and make any necessary correction. 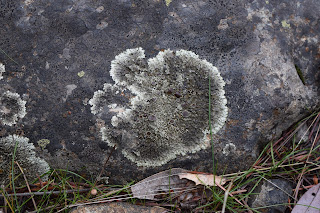 A very common lichen growing on rocks in the Sierra.  This one is around 4" across.  In the high Sierra, a patch this size can be hundreds of years old.
That's all for now except to mention that the only unpleasant part of this excursion was encountering the most dog poop I've seen anywhere in our national forest.  Very disturbing.  Every time I got down on the ground to get a close-up, I had to dodge dog poop.  Among other things, that brought to mind the problem of giardia.
That being said, I really respect the fungi - they'll clean it all up, with some help from bacteria.
Posted by Joe Willis at 9:38 AM No comments: