Do Ants Have Aspirations? 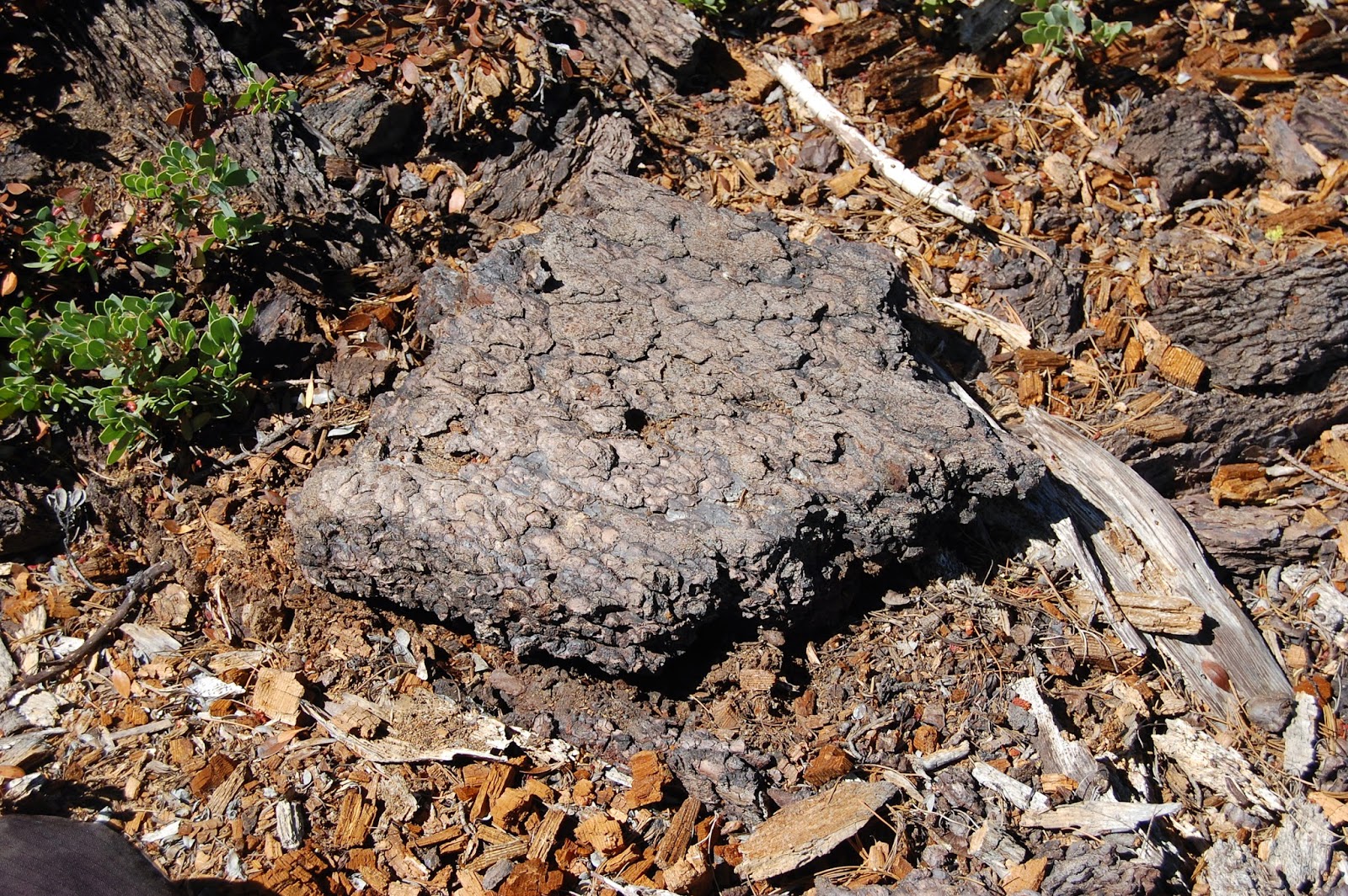 On our recent hike in Bucks Wilderness, we saw a bear, great views overlooking tiny lakes, a distance view of Lassen Peak, and several new (to us) species of wildflowers.  Yet, for reasons not entirely clear to me, the scene portrayed in these four photos lingers as a significant experience.  I'll need to mull over the title question (above) a while longer.  I might have an answer before bedtime. Click on each photo for a closer view. 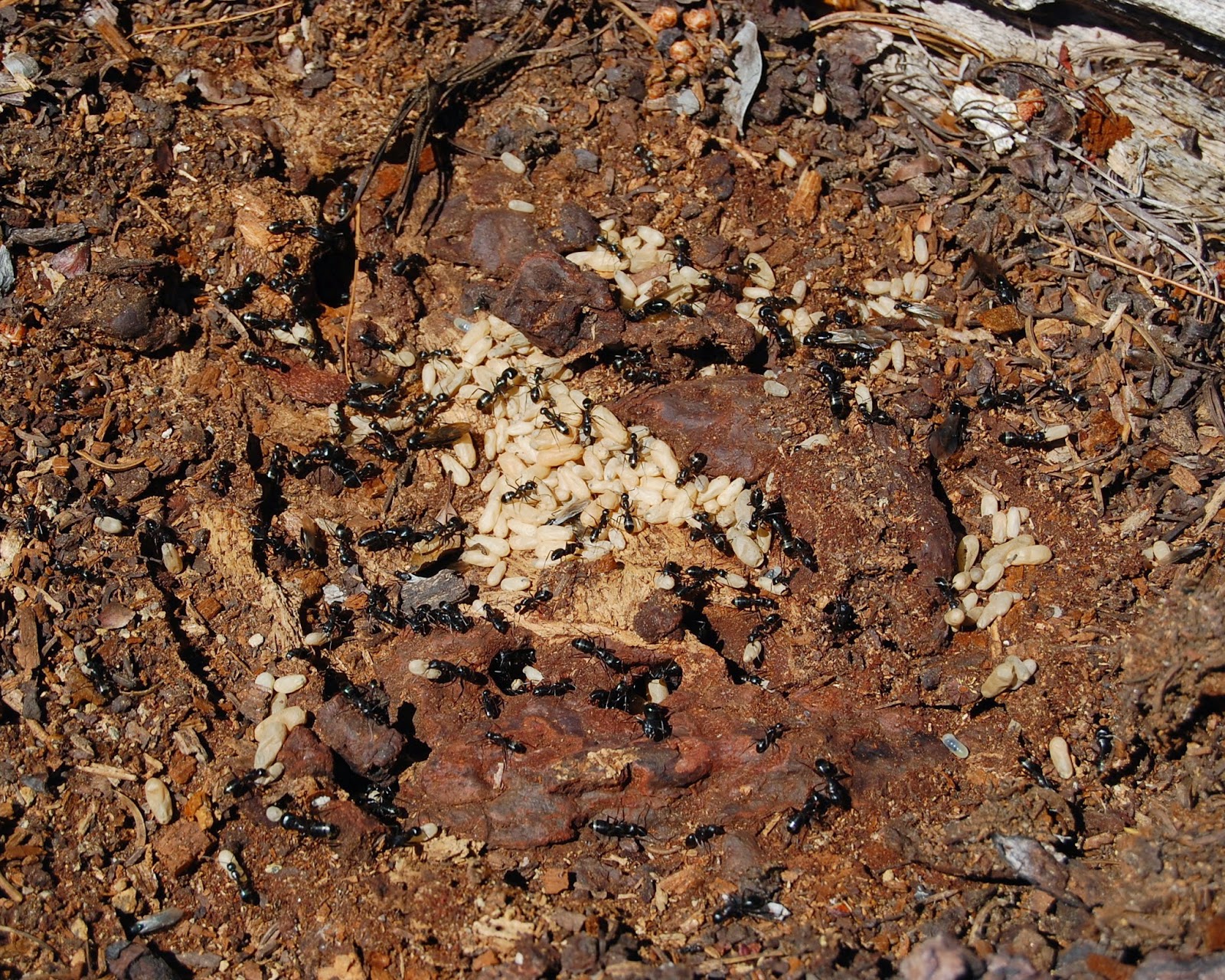 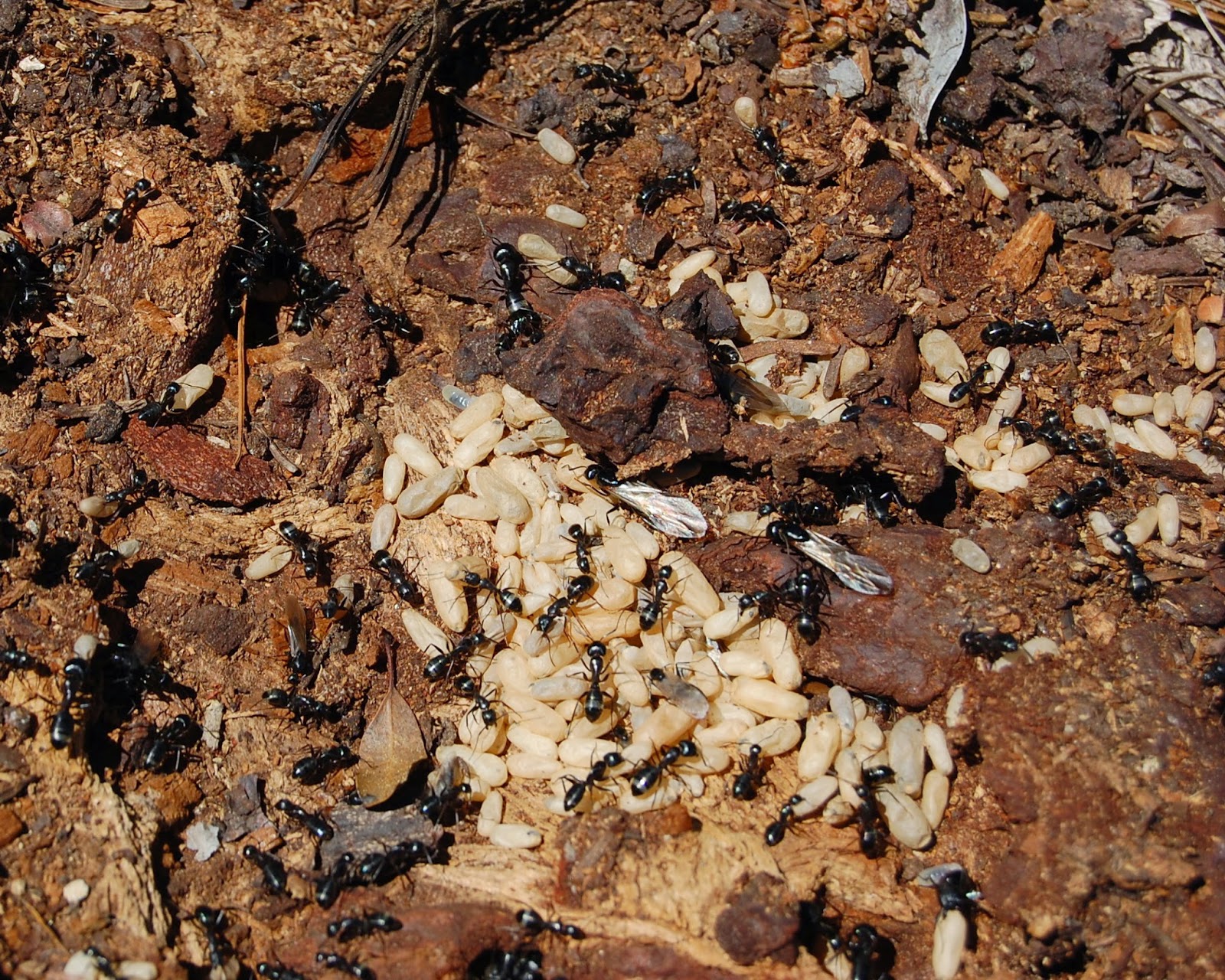 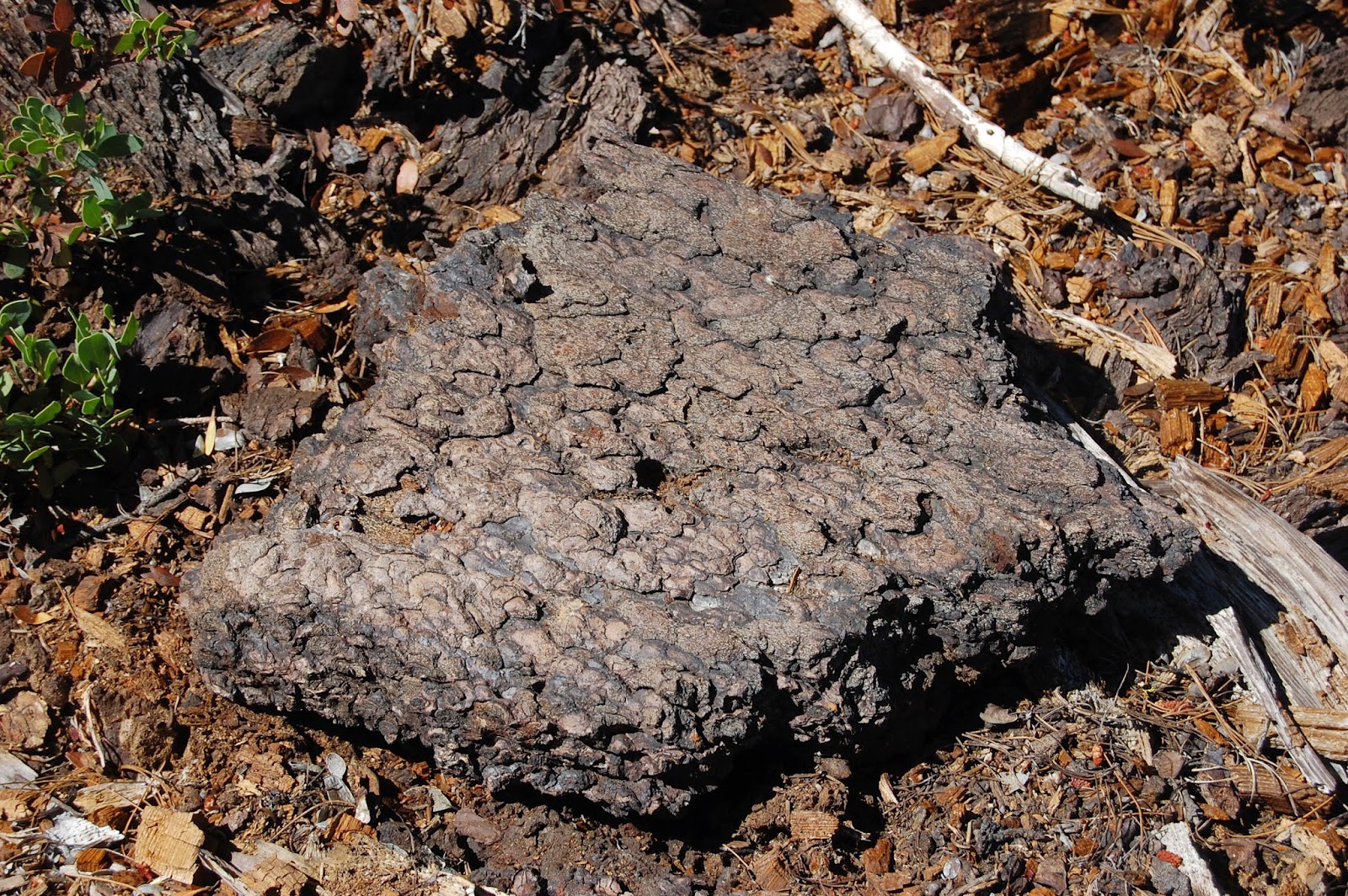 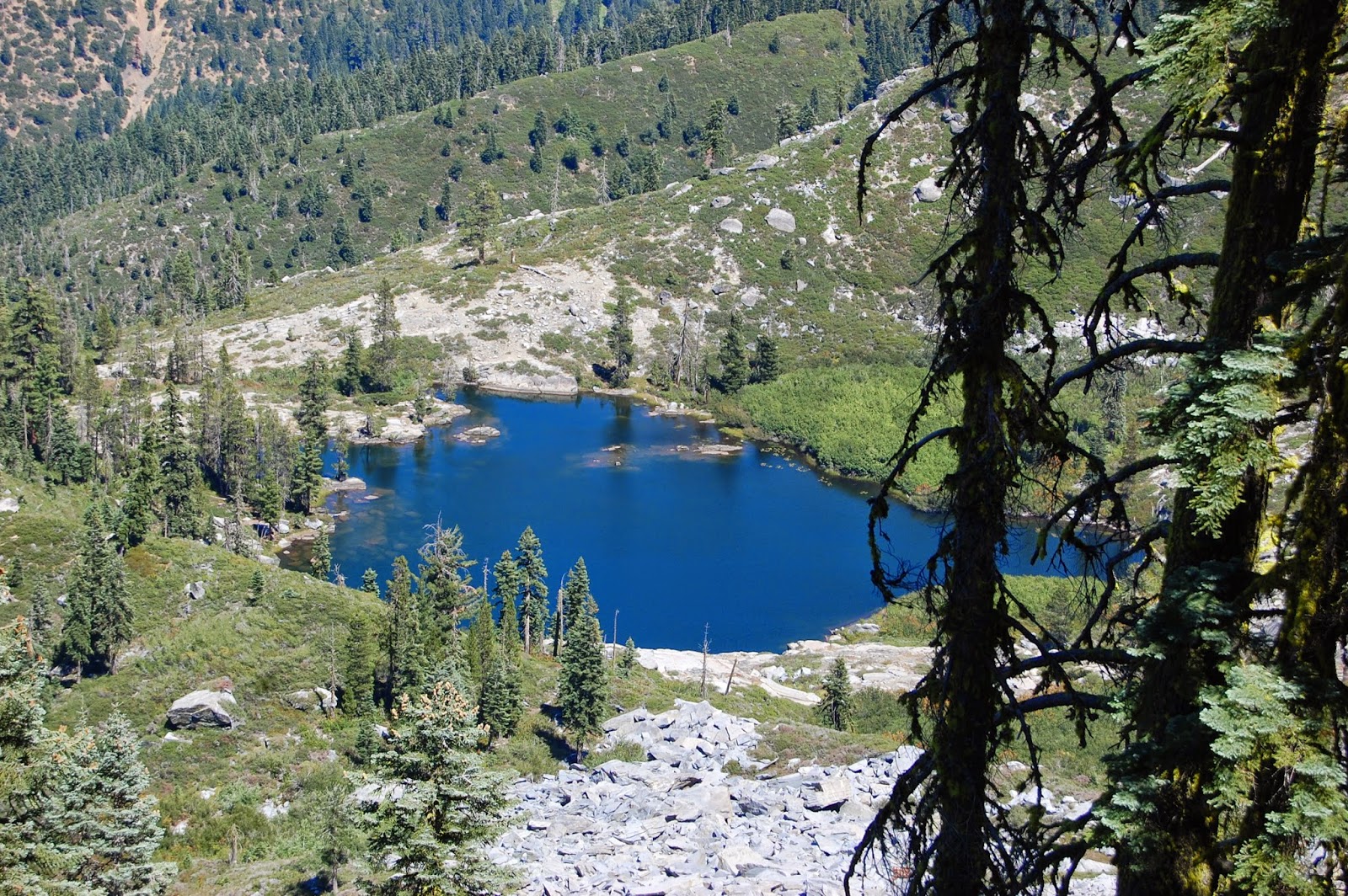 Check my previous post for an explanation of the "Lost and Found" reference.  The above photo is a view of Lost Lake from the ridge where we stopped to rest on last Saturday's excursion.  The additional images below are some of my favorites from the hike along the ridge toward the Lost Lake overlook.  Some nice shady forest at 6,000-plus elevation was a great habitat for fungi and some late season blooming.  The golden or sulfurous fungus below was an outstanding sight.  It seemed to glow compared to the dark shadows around it. 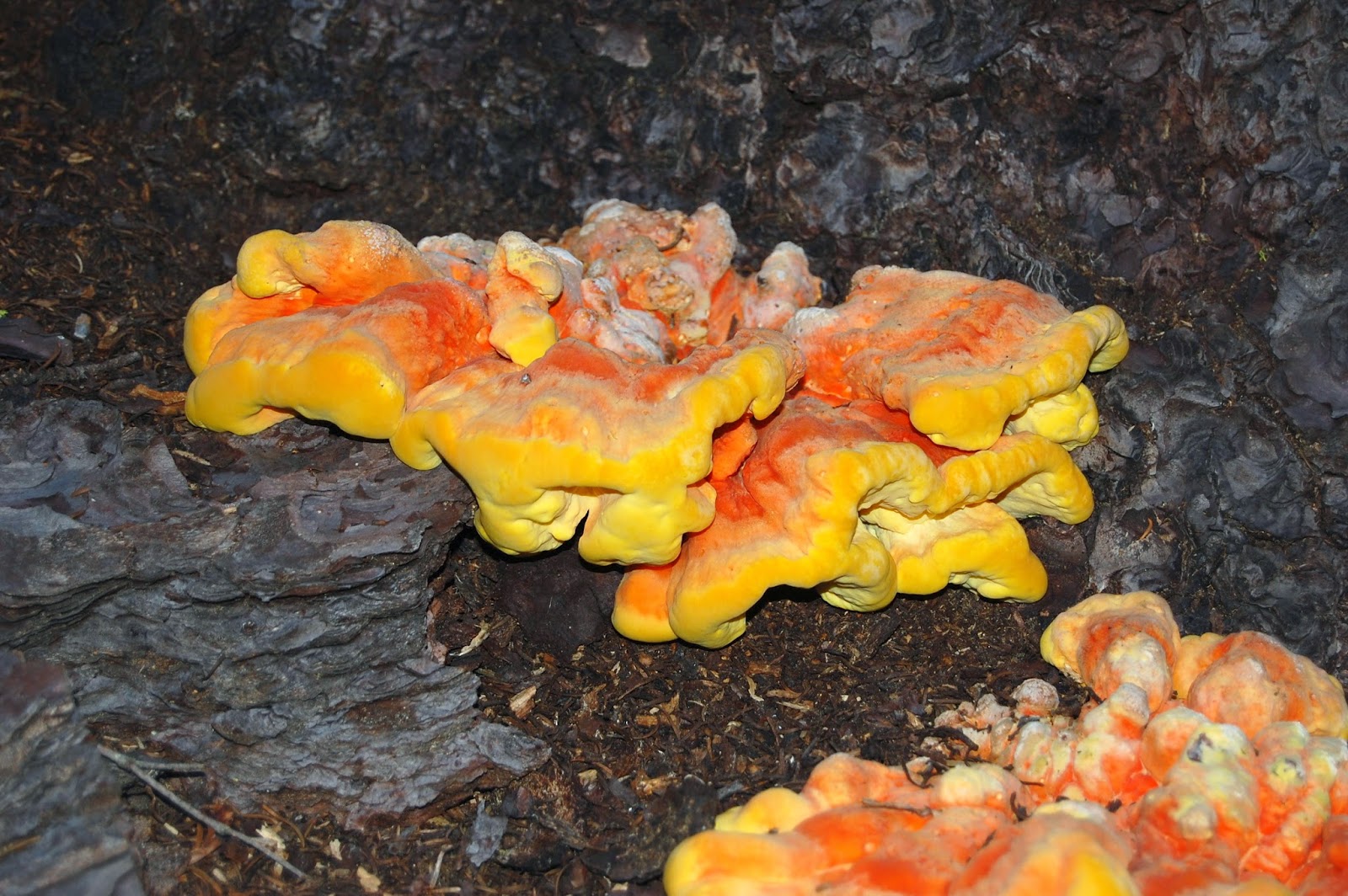 This puffball fungus was around 3" in diameter and looked really fresh. 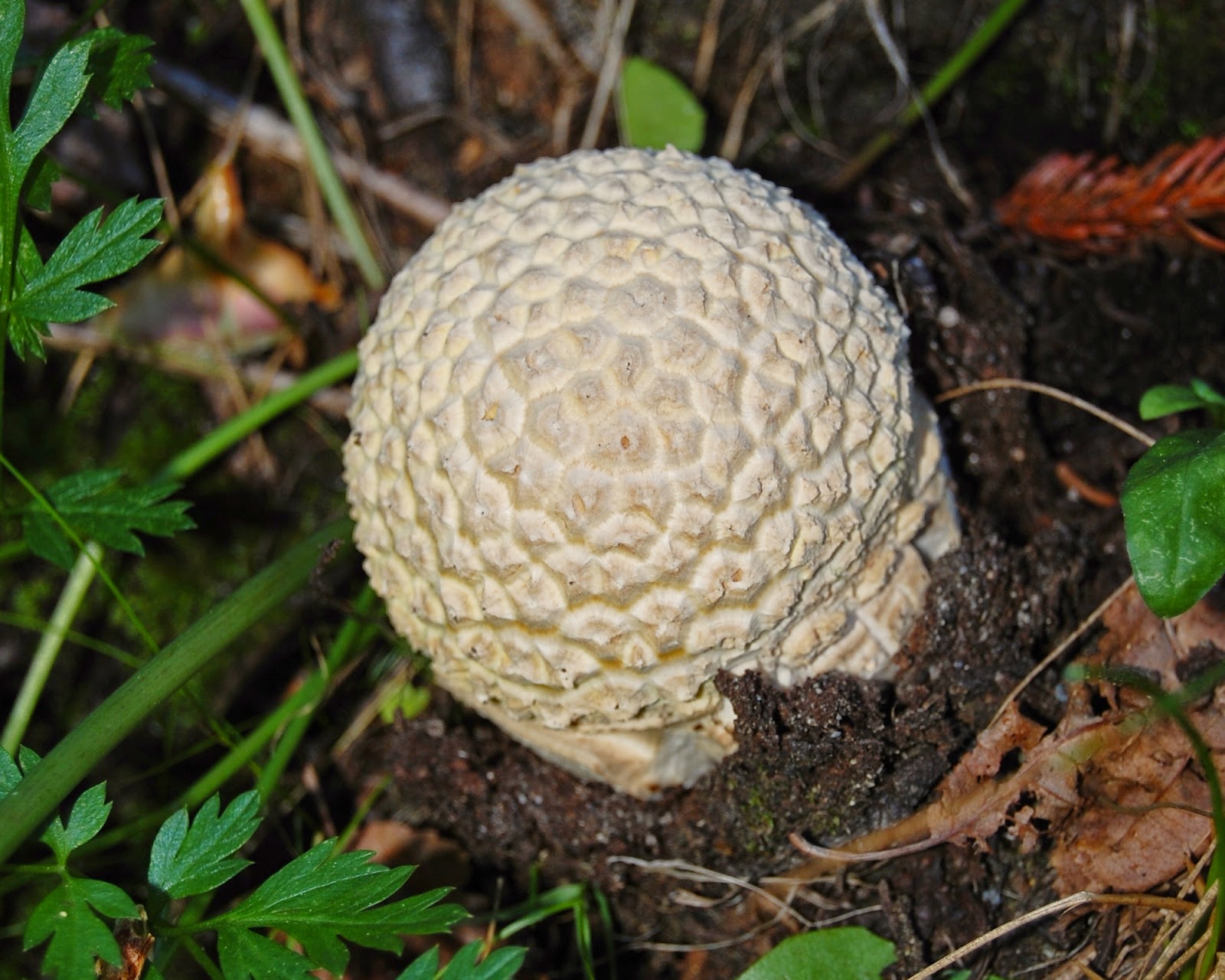 The plant below was a new one to me.  It vaguely resembled Indian Rhubarb (or Umbrella Plant) both in overall size and structure and choice of habitat.  Sure enough, it turned out to be a Saxifrage and is called Great or Large Boykinsia, Boykinsia montana.  It's one of many wild plants whose common or popular name is the same as the scientific name - such as Iris, Magnolia, Rhododendron, Aster, and Gilia. 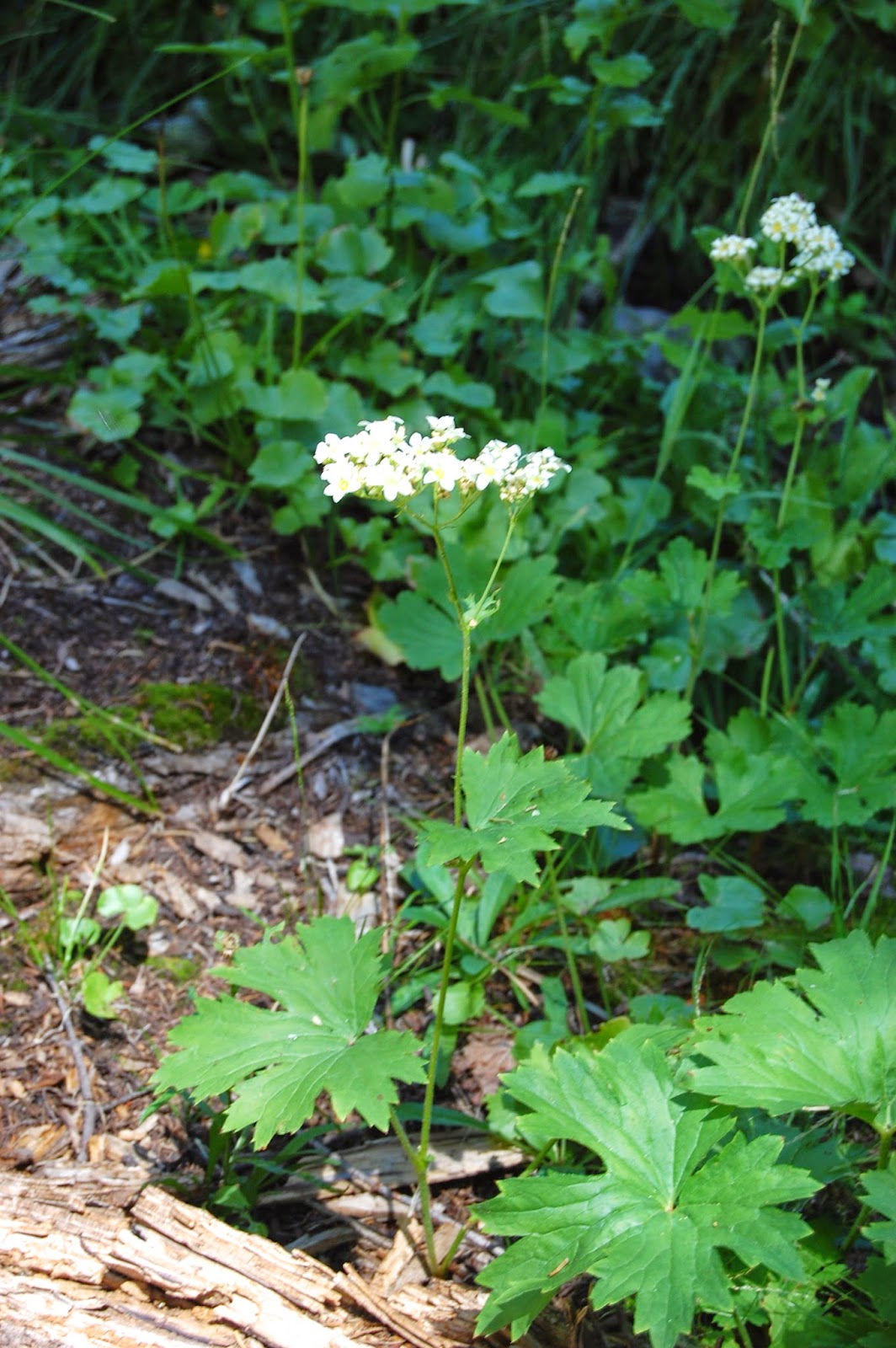 A closer view of the flowers shows the great resemblance to the flowers of Umbrella Plant. 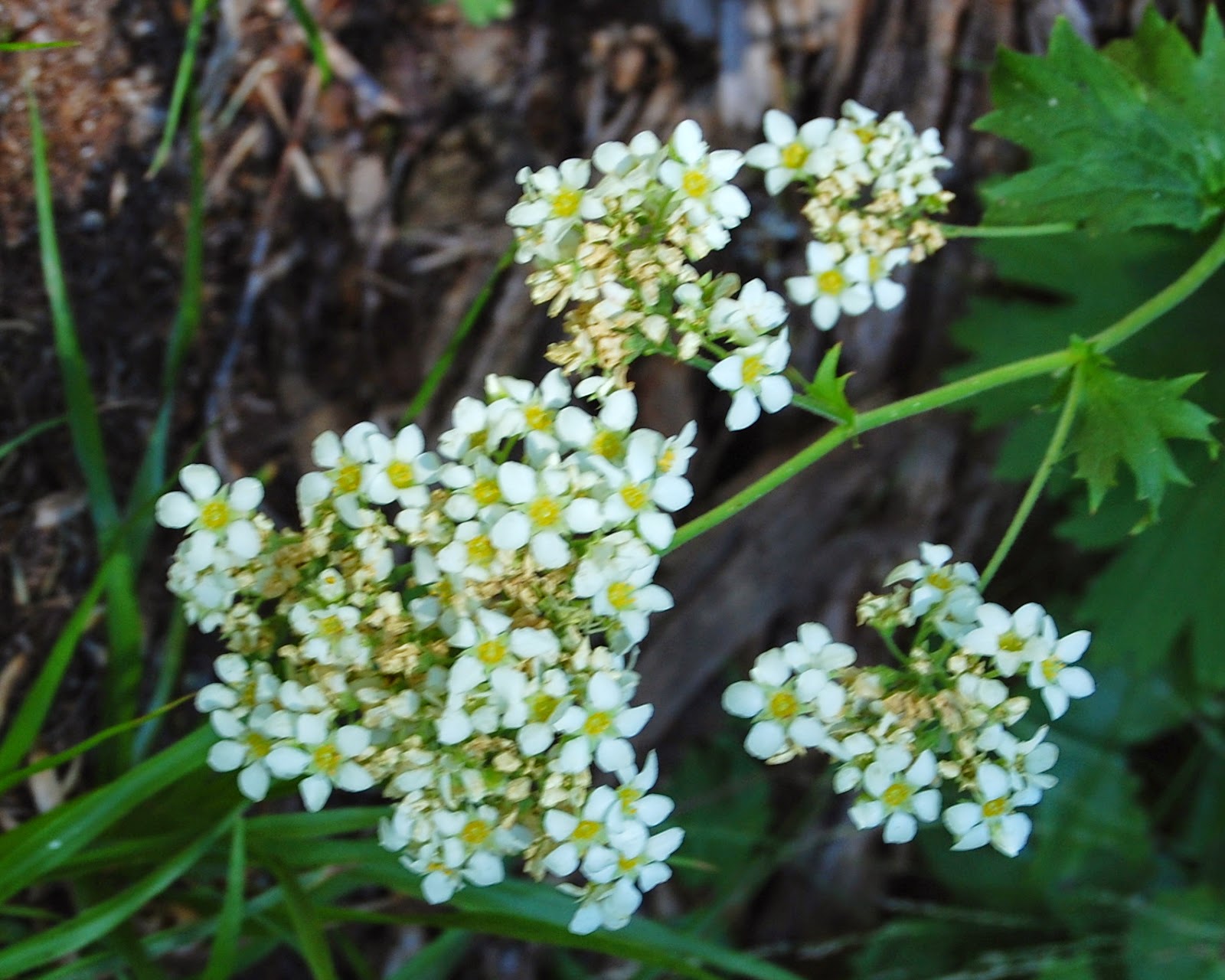 It was growing in a nice little stream.  It was good to see some flowing water after hiking for hours through very dry forest.
Posted by Joe Willis at 7:00 PM No comments: 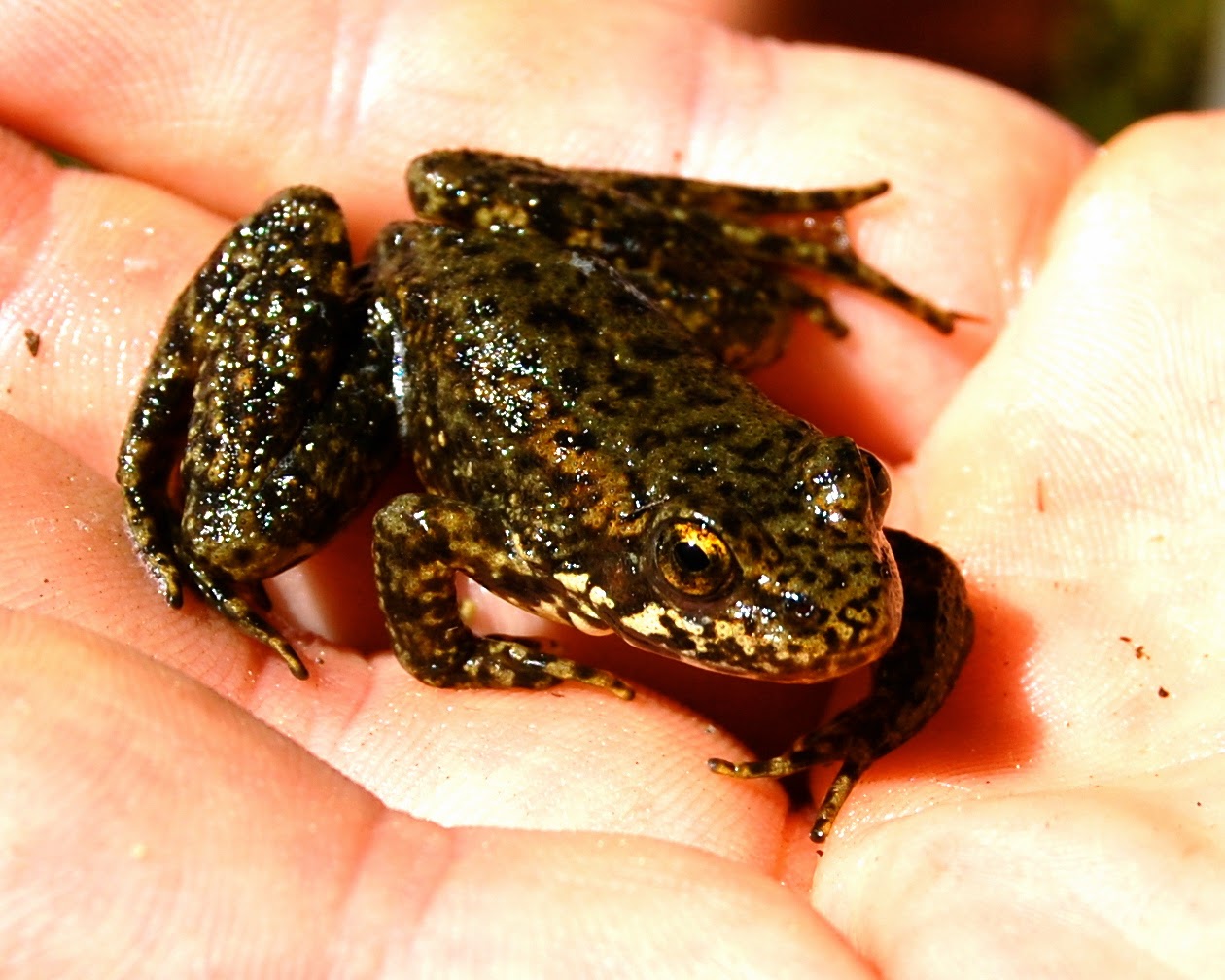 Hiking off trail in Bucks Wilderness with my son Greg, I was reminded of when my kids were toddlers and in similar situations would ask, "Dad, are we lost?"  I'd say, "No.  We're right here."
So, one of our objectives yesterday was to find Lost Lake.  I wondered how it got that name.  It seemed that if someone found it, it should be named Found Lake.  If they didn't find it, there'd be no need for a name.  Such is the sort of crazy thinking that happens when I'm walking up steep granite slopes in blazing sun, thirsty, and overwhelmed by the beauty of a place.  On the way to Lost Lake, there are quite a few very small lakes apparently without names.  One of these my son had found on a previous trip and said it was loaded with Yellow-legged Frogs, currently the subject of an ongoing fish vs. frogs diatribe.  I was excited at the prospect of seeing lots of these frogs since I hadn't seen any in a quite a few years.  I remember clearly that when I first arrived in California in 1965 they were common in nearly all the creeks and ponds I visited in my frequent forays into the Sierra from my first California home town, Yuba City. So, the photos above and below are a small sampling of our findings.  I had forgotten about the high quality of their slime.  It is very hard to remove.  The rocky shoreline of this still-lost lake had hundreds of these beautiful frogs resting half submerged and very alert as to our presence.  Our informal "research" has found these little lake have either notive frogs or non-native fish, never both.  Hmmmm.... 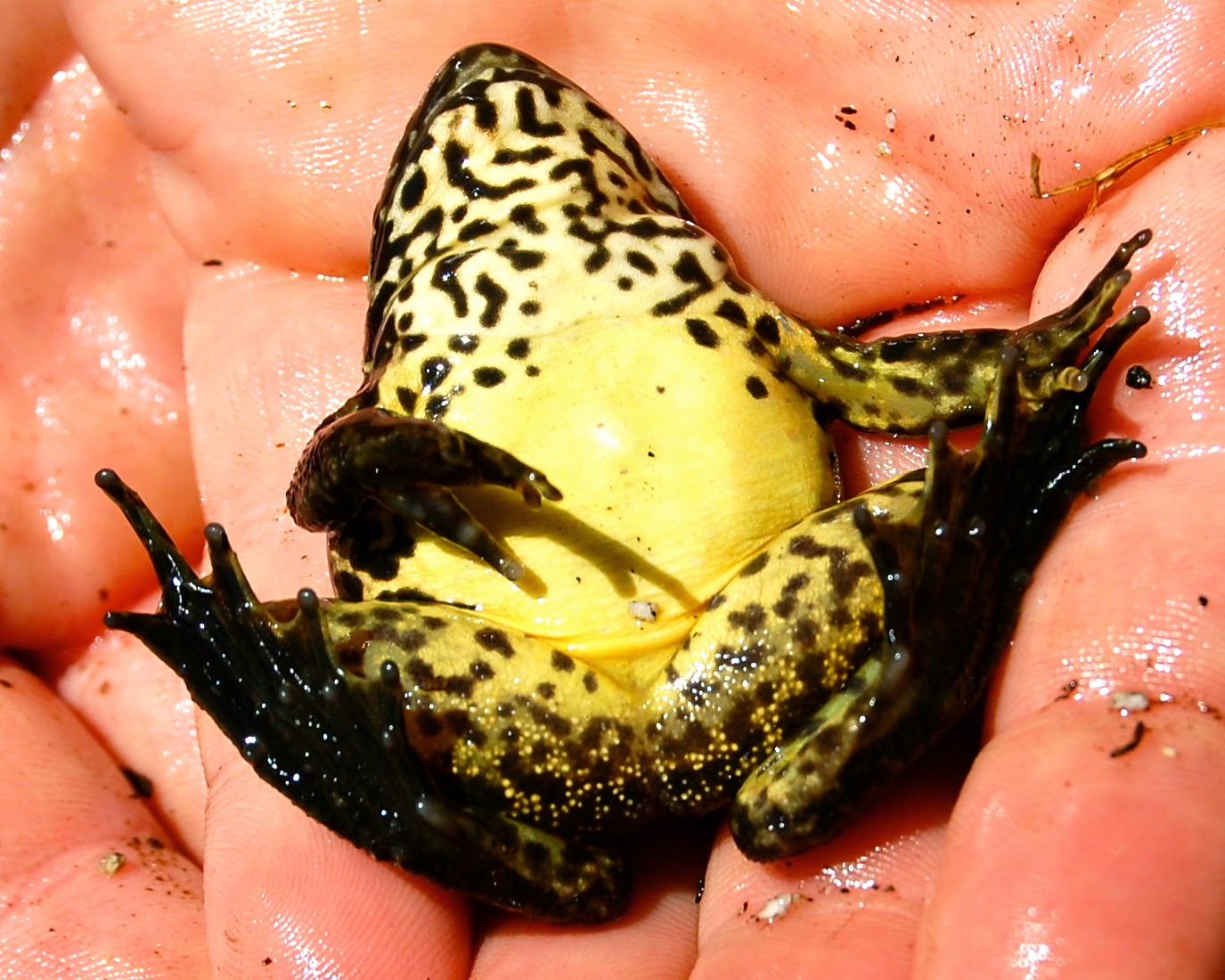 In a deep canyon adjacent to our frog lake, we heard a rustling in some bushes perhaps 100 feet below us.  We wondered - Aplodontia?  Marmot?  What could it be?  The scale of things in this high country is very deceiving.  What seems to be small boulders in the distance often turn out to be house-sized when approached.  That was the case with this animal noise.  When it emerged from the bushes, it turned out to be a full-sized Black Bear (cinnamon phase).  Bears always mesmerize me by their body motion suggesting they are slow but their actual speed being much greater than mine. 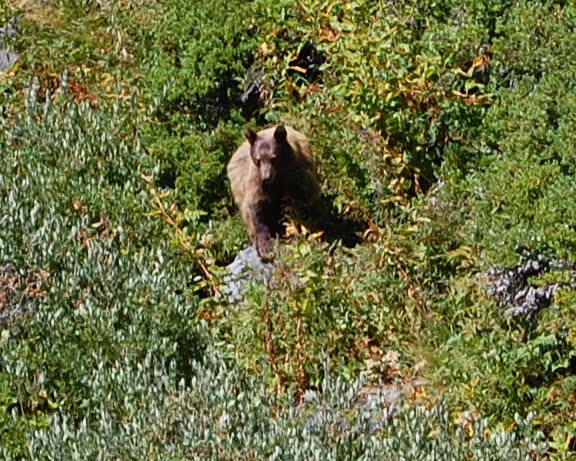 This bear was obviously aware of our presence.  It first headed uphill in the canyon, but Greg got a little bit ahead of it on the granite wall above, so it made a U-turn, at which point I got these photos, then it continued down the canyon and disappeared over an open granite ridge possibly a quarter mile away. 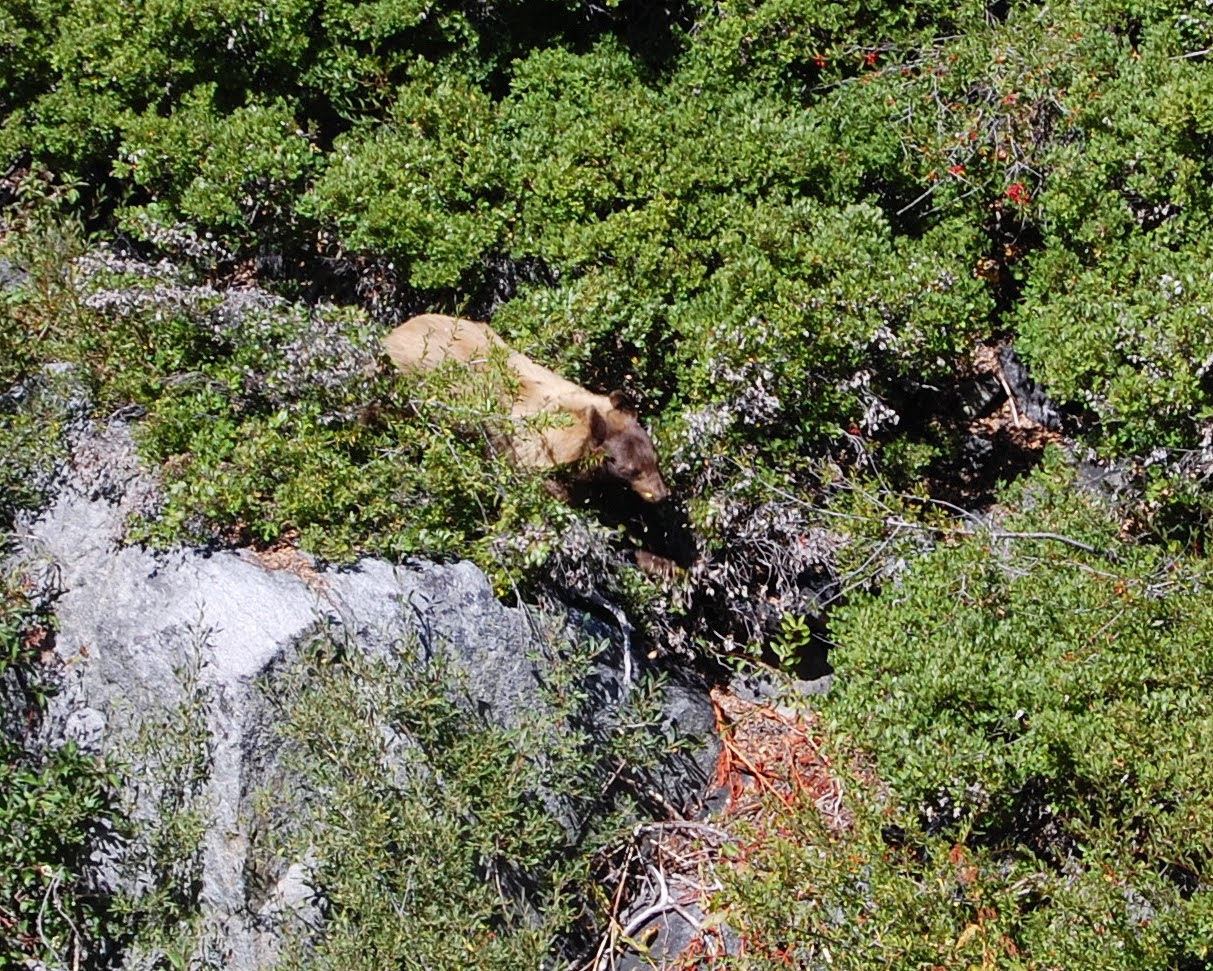 I think we covered approximately 10 miles.  It felt like 20.  We ascended from Silver Lake through the woods and over the granite, visiting several lakes, until we arrived on the Pacific Crest trail at a point just east of Mt. Pleasant.  We then hiked more or less NW along the PCT to a point a mile or so past Mt. Pleasant where we found an overlook of Lost Lake, probably at least 500 feet below us.  We then hiked back along the PCT to Granite Gap from which point we hiked back to Silver Lake on a well-marked trail that passes between Rock Lake and Mud Lake.  All in all, we saw great views in all directions and I took over 150 photos, many of which I'll be posting in the next few days.
Posted by Joe Willis at 12:04 PM 2 comments: 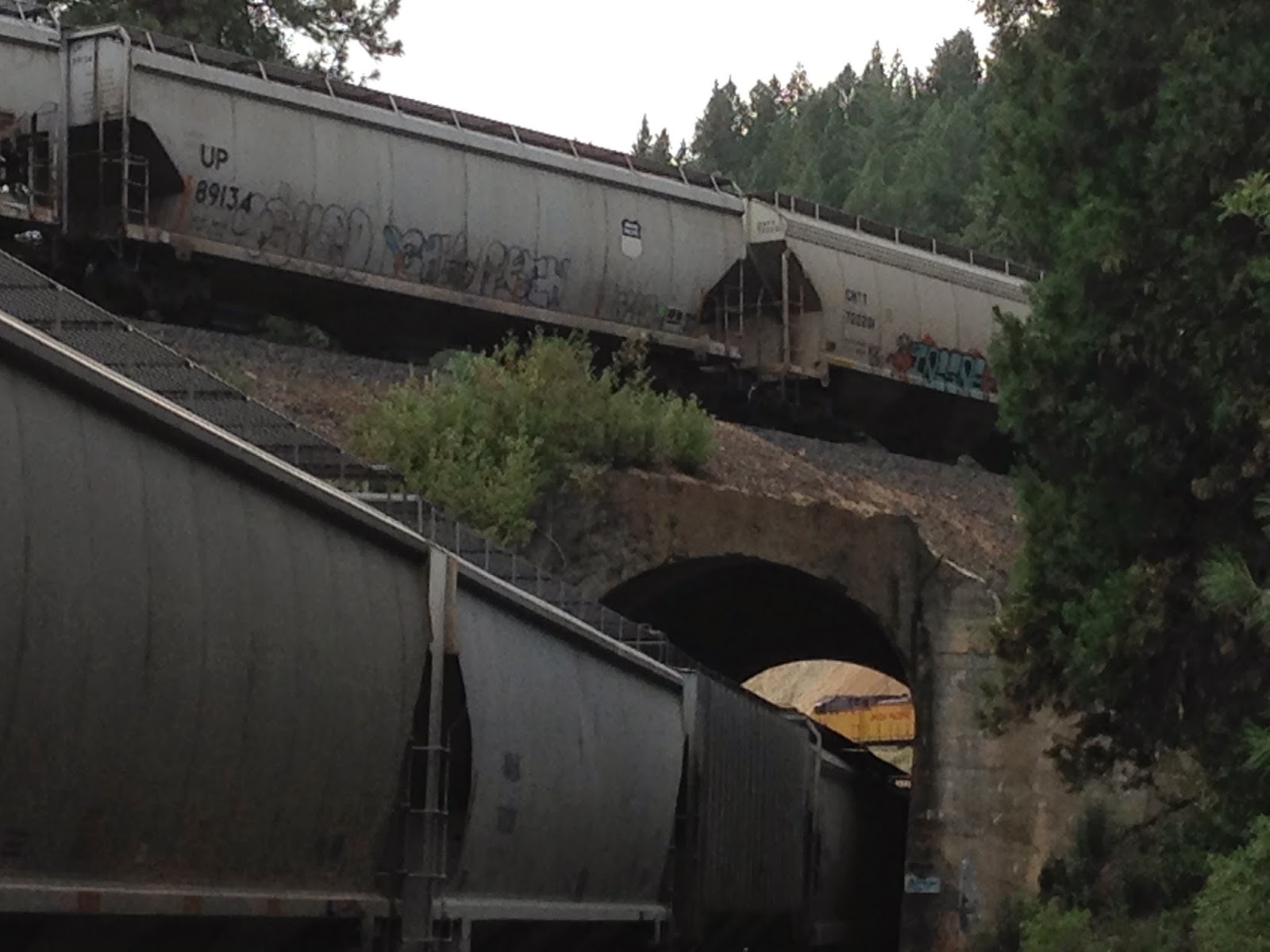 My son first spotted this train - yes, it's only one train - in the Blairsden area, then quickly headed toward Quincy where the train was headed.  A just-in-time stop at Williams Loop allowed him to get these shots. 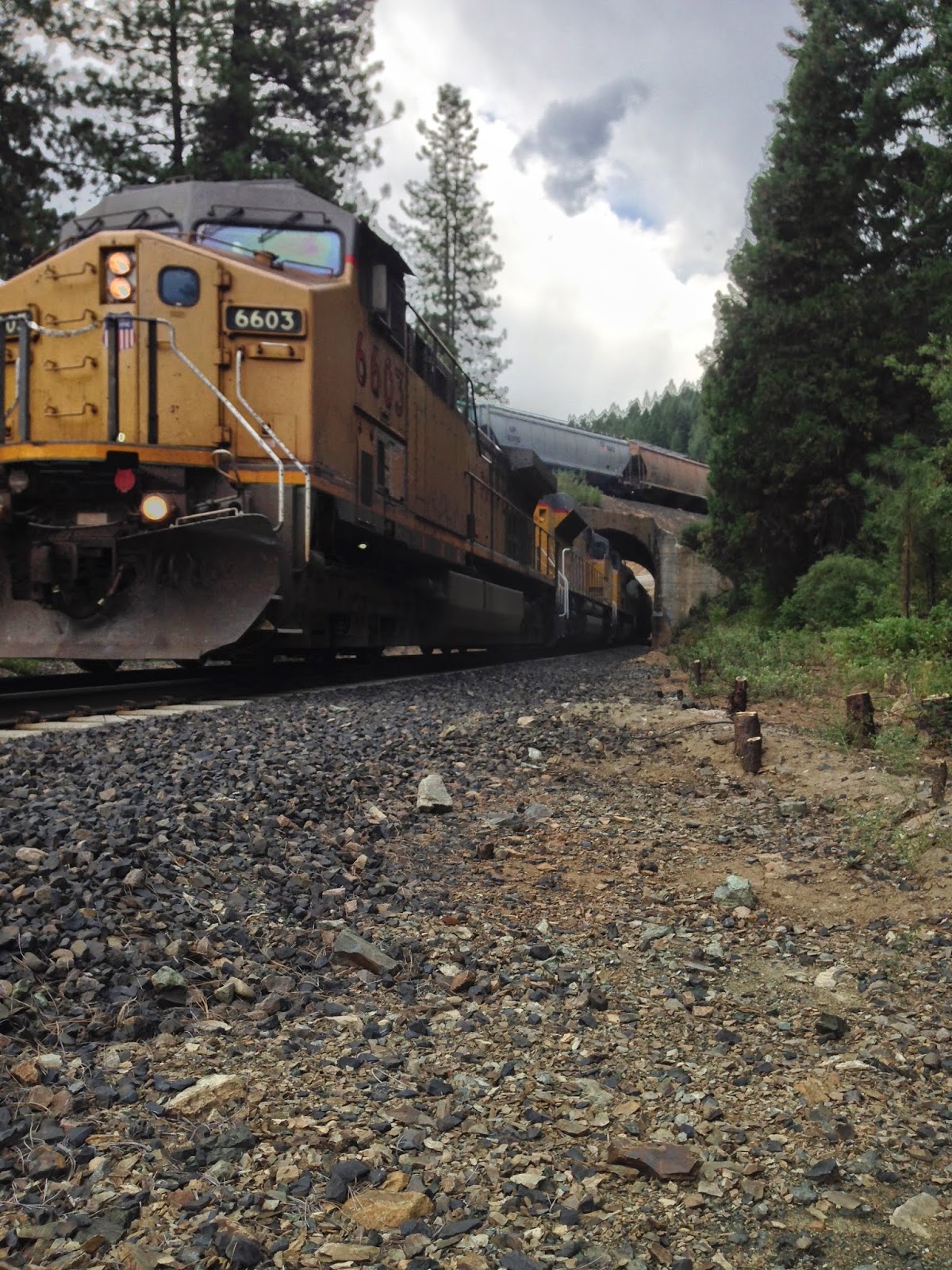 For some reason, this scene reminded me of centipedes, so I pulled this Mother's Day photo of a Centipede caring for its eggs from my 2013 archive. 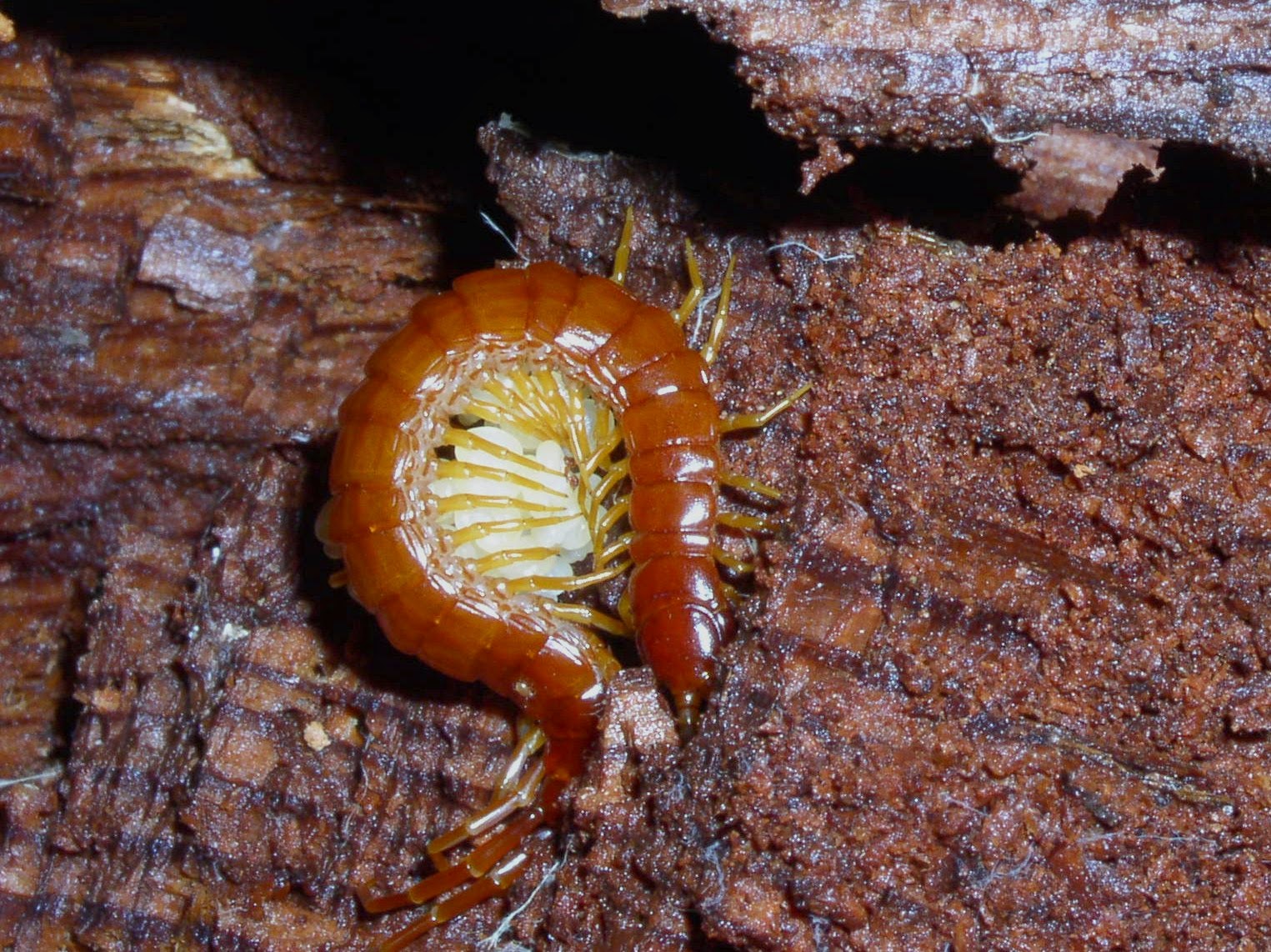 Posted by Joe Willis at 8:49 PM No comments:

Too Wet to Fly 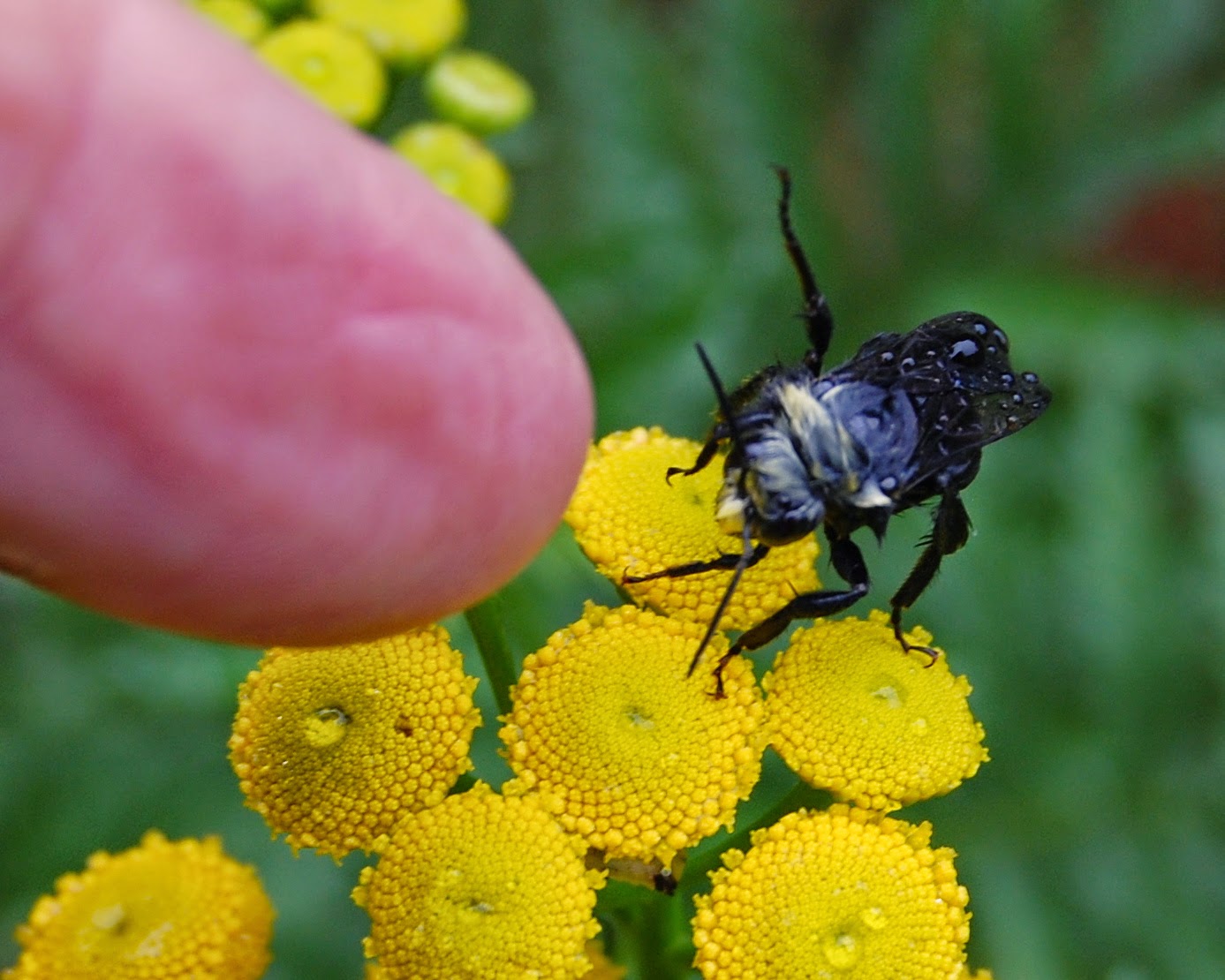 I could only spare about 15 minutes.  Not enough time to dig into the last files of my trip to the Tahoe Rim Trail, nor my trip to Brady's Camp.  I will definitely do that when the dust settles.  With two days of rain so far, the dust is definitely settling.  So, with that 15 minutes, I grabbed my camera and head for a shopping errand at Safeway.  Made three quick photo stops along the way.  First, on a patch of Tansy in front of a neighbor's house, I found a Bumblebee too wet to fly.  When I poked her, she barely moved at all.  When I kept on poking her, she eventually got disturbed enough to flail at me with her legs.  Still too wet to fly or to try to sting.  I then took about a five minute walk in the vicinity, and when I got back she was still in the same spot.  Probably will stay there until it warms up tomorrow afternoon, then fly to other flowers.

Posted by Joe Willis at 8:18 PM No comments: 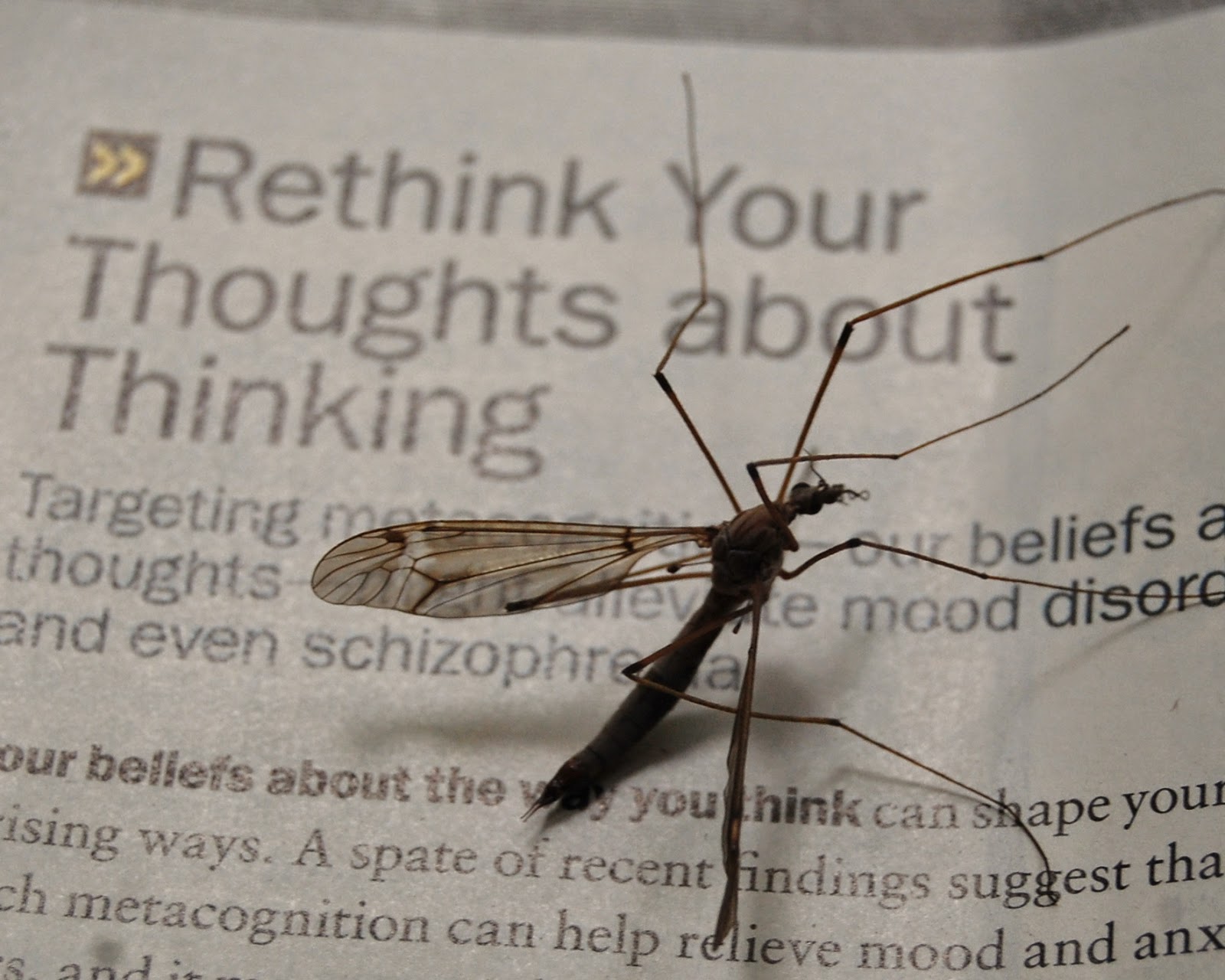 Having a little trouble getting traction on my blog for August.  Here's today's weird photo and story.  I was walking down the sidewalk by my house when a lightweight something or other bounced off my head and landed on the cement.  It looked like a live Cranefly, and I didn't have my camera.  I figured if I attempted to catch it, I'd never see it again.  I bent over and picked it up.  It was dead!  It actually landed in an upright position as in the above photo, but rigor mortis had set in and it was clearly dead.  I brought it in the house for a photo session.  Maybe I should the read magazine article beneath the insect.  It might help me get my thinking back on track for another month of natural history blogging.

Posted by Joe Willis at 8:06 PM No comments: 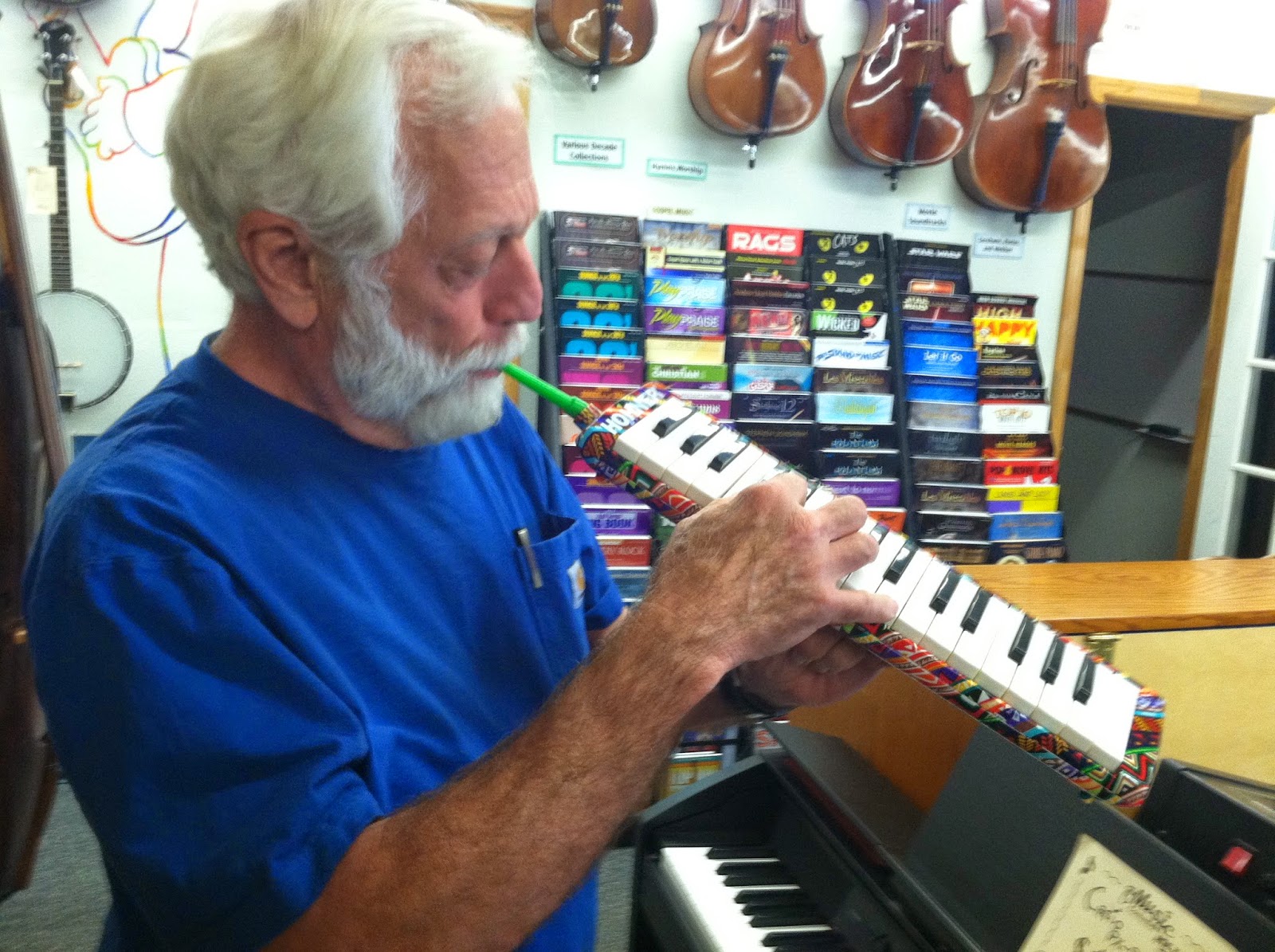 We drove through the Feather River Canyon Saturday in order to do some shopping in Chico.  As always, I was getting a bit of eye strain trying to spot new wildflowers while going 55 and trying not to run off the road.  Since we had a bit of a tight schedule ahead, I decided I wouldn't stop unless I saw a blooming flower I hadn't yet seen this season.  I never stopped.  Here's what I saw: St. John's Wort, Star Thistle, Gum Plant, Wall Flower, Mullein, Goldenrod, Groundsel, Hooker's Evening Primrose, Yellow Sweet Clover, and Arnica.  Every blooming flower I could from the car was yellow.  So, I didn't get any photos.  However, I really had the urge to find something worth blogging about.  So, I'm posting the above photo taken by my wife in a music store.  This keyboard instrument, powered by my breath, is known by many different names.  Most common around these parts seems to be Melodica.  I prefer to call it an "unnatural piano."  So, the closest thing in the photo to a natural history topic is either me or the wood of the violins in the background.  This crazy post is just a way of expressing my frustration at not finding a great natural history topic on Saturday.
I did spot something interesting by Wick's Corner while going 65mph on the freeway.  A small irrigation pond behind a barbed wire fence was covered with a purplish brown plant, a floating fern called Azolla.  It's a very interesting little plant that I've kept in aquariums on occasion.  I'm tempted to go back there to get some photos so I can tell its story.

Posted by Joe Willis at 7:58 PM No comments: