It Happened So Fast! 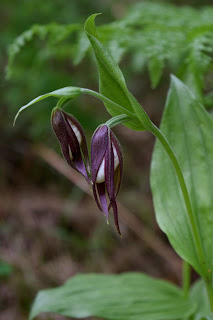 A week ago after work I went out toward Oakland Camp to check on the status of the Mountain Lady Slippers.  See the top photo in the blog of May 5.  I saw several of the plants with no buds yet.  Yesterday, I went to the same spot and Voila!  Blossoms.  They are not yet fully open, but certainly identifiable as the flowers of the Mountain Ladyslipper.  I had n't even gotten around to posting all of the photos of other species that I took on that trip last week.  But these new blossoms were so exciting, I decided to jump ahead.  Also, just a few feet away from the Ladyslippers were dozens of 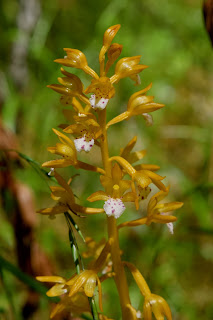 specimens of the Spotted Coralroot, another orchid, in full bloom.  I hadn't noticed even small shoots last week.  The soil temperature and moisture must be ideal, because things are happening fast.  Also, every time I turn around I see another species blooming for the first time.  Western Dog Violet, Scarlet Fritillary, various species of Ranunculus (buttercups), a few Stickseed (Forget-me-nots), among others.  My favorite photos from yesterday's outing was the newly blooming Lemmon's Wild Ginger.  Tomorrow morning I'll start catching up wth the photos from both outings, May 5 and May 12.  Remember, you may click on any photos in the blog for enlarged views.
Posted by Joe Willis at 4:33 PM 2 comments:

Faith in a Seed 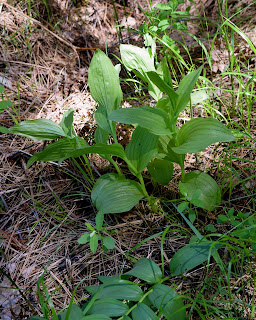 During the past few weeks, the bridge over Spanish Creek that leads to Oakland Feather River Camp has been covered by rushing water. A short distance past said bridge is where the Mountain Lady Slipper may be found around this time of year.  I've been going nuts waiting for the water to recede. Finally, yesterday I drove out there with my camera and found the bridge surface to be dry.  However, there was still fast-moving water covering a stretch of pavement beyond the bridge.  It looked like it was only six to eight inches deep, so I chanced it.  Then my Spring began.  I was delighted to find that the Mountain Lady Slippers (above) were around a foot tall, but had not yet produced buds.  That means I probably have a couple of weeks during which I can notify my naturalist friends, such as my friend and mentor Rex Burress, that the "lady slippers are coming." There's also an orchid enthusiast in France awaiting contact from me on the status of these beauties as he hopes to visit during their bloom. 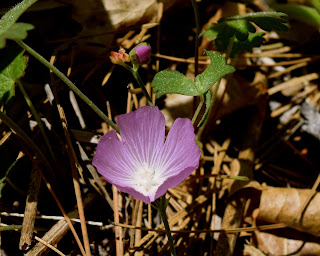 I continued toward the camp and found a few other species blooming.  I'll post a few here today, and more over the weekend.  This Checker Bloom (above) was the only one I saw, and it was well hidden under the shade of leaves of the Arrow-Leaf Balsamroot (coming in my next post). 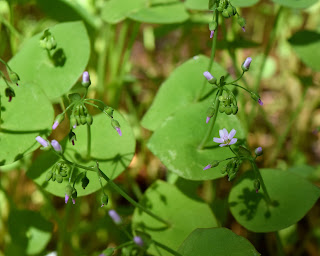 The Miner's Lettuce are blooming in abundance, but I was pressed for time so I recorded as above, but it's not a great photograph.  Hopefully, I'll do better over the weekend. 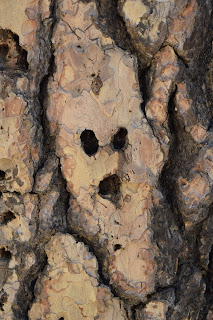 In the nostalgia department, I saw this great face in the bak of a large Ponderosa Pine, whom my friend Rex calls "Walter" in honor of a deceased naturalist friend.  The face is still intact, and I am fond of the moment Rex introduced me to him around 10 years ago when he came up to Quincy to see the orchids. Below is a view of the tree which is a major landmark to us naturalists. 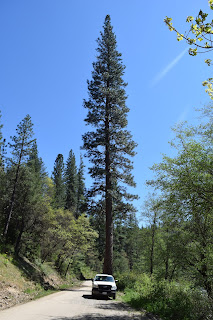 Finally, I tipped over a flat rock around a foot in diameter, and typical of my luck in early Spring, I found a beautiful Jerusalem Cricket. 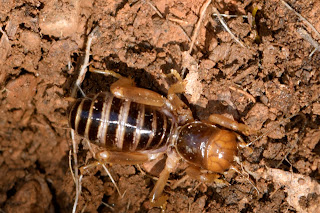 The most amazing thing about my day is that when I got home I found Rex's most recent essay which just happened to be about this very area and reminisced about the time we viewed the lady slippers together.  In sum, I was reminded of some great writing - Henry David Thoreau's last to be published - Faith in a Seed.  After around five years of drought, then our recent wet winter, I am reminded to always have faith in a seed.  Thoreau said something along the lines of "show me you have a seed there, and I will expect miracles."
Posted by Joe Willis at 11:02 AM No comments: