What I Saw Today 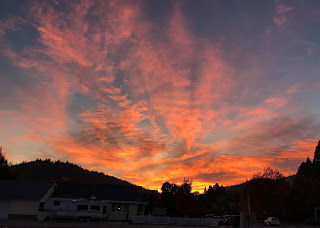 Every morning, just before sunrise, I am reminded why most Native Americans traditionally have the entrances to their dwelling facing East. 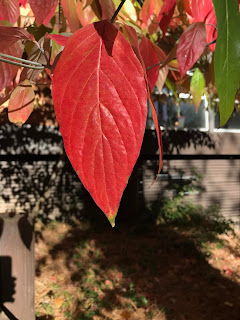 It has taken me a couple of months to get back to this mid-October post that I abandoned after posting only the above photo of a sunrise as seen on my way to a local coffee shop. It is now January 5, and I plan on posting more this year on the theme what what I see early in the day that sets my day in motion. The Dogwood trees on the Feather River College campus are mostly still showing bright red foliage at this time of year, but there are either different varieties of cultivars and/or different soil types that may account for the huge differences in coloration.  For instance, the tree in the photo below is only about 15 feet away from the one shown above. 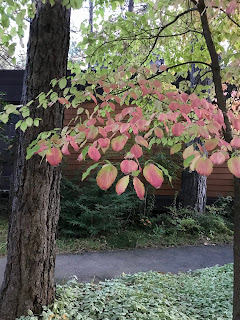 This panorama of trees along the paved walkway to the upper campus always impresses me. I bright red-orange California Black Oak stands out among the surrounding evergreens that include some California Incense Cedar, White Fir and Douglas-fir.  I little further up the hill is a small stand of Black Cottonwood. 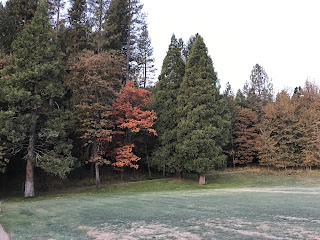 Another thing I enjoy following is the work of gophers fighting back against our (but not me) attempts to eliminate them - after having provided them with ideal conditions for expansion.  The well-watered and fertilized green area hosts lots of gophers, deer, and wild turkeys.  Great fun to watch before the morning human traffic picks up. 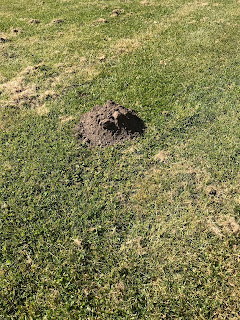 Posted by Joe Willis at 7:19 PM No comments:

The Summer that Wasn't, Part II 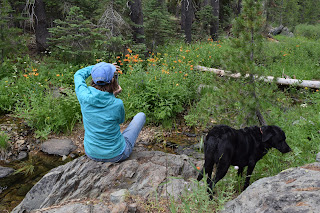 We made a few stabs at a normal summer (see previous post), one of the most satisfying was a visit to Brady's Camp. The flower display up there around 6,000 feet peaked later than usual. Bib and Loki perched on a rock overlooking the creek bed that was loaded with blooming Leopard Lilies, Monkshood (below) and many other species. 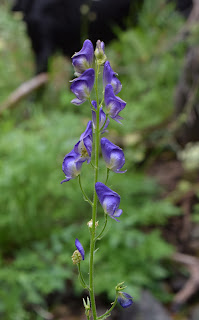 In the marshy expanse on the other side of the campground was a nice crop of Checker Mallow, cousin of Checker Bloom which I've often photographed at lower altitudes. 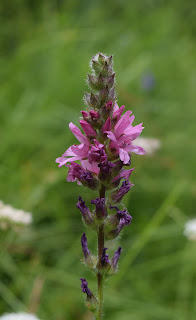 I made a few visits to the FRC campus in July and August, mostly to assess whether I'd be able to walk up the hill again after my surgery. It seems that the combined effects of years of drought and "landscaping" have diminished the wildflower displays along the path to the upper campus.  However, there still survived a small patch of Lemon's Wild Ginger. 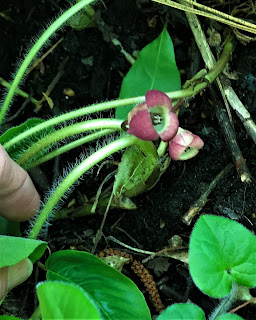 On a more recent hike up Sierra Buttes (see previous post), we saw patches of a beautiful red flower blooming at nearly 7,000 feet. My first impulse was to say it was a Penstemon common at high altitudes, but that didn't seem quite right. The stamens and pistil projected quite far out pa st the corolla, and the red color wasn't quite right. When I got home and looked closer at the image on my screen, I realized it was California Fuschia.  Without getting out a hand lens and inspecting the flower parts more closely, I would never have guessed it is an Epilobium, the same genus as Fireweed (bottom photo) which I photographed near Oakland Camp at around 3,500 feet elevation. 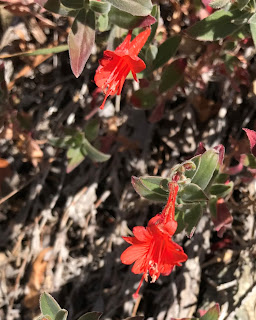 These photos represent around a day and a half of exploring with my camera, a very small part of summer rescued from a summer spent mostly recovering from surgery. As winter seem to be approaching quickly, I plan to refresh my winter photography skills and continue to blog more regularly. 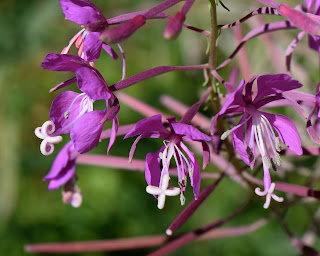 The Summer that Wasn't 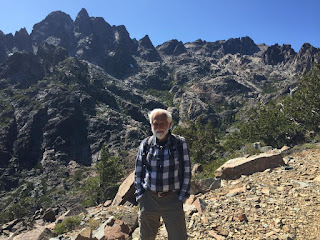 The summer of 2019 was far from the sort of summer I had gotten used to.  It ended with a kind of celebratory hike with my wife up a trail on Sierra Buttes that was new to me. This trail was a steady, uphill hike of about 3 miles along a southern ridge of the Buttes that offers a short side-trip to Volcano Lake.  I had summited the Buttes several times years ago, always approaching from Upper Sardine Lake on the eastern side, and more recently from the Packer Saddle campground, more to the North. Now, at age 78, I don't think climbing the eastern face would be wise.  Our hike, pictured above, on September 21, was a kind of celebration of still being alive, much less able to hike 6 miles on steep terrain, as I began the summer with a week-long stay at Renown Hospital dealing with prostate and kidney failure.  Before that event, which was at the end of May and early June, I hiked with my colleague Dr. Joan Parkin on the Keddie Cascades Trail and spring had not quite arrived.  No flowers or active bugs until the very end when I discovered a little "banana belt" of micro-habitat where a few Leopard Lilies were blooming. Below.  It had been quote a wile since I last posted anything to this blog, and quite a while since I had used my Nikon to take any serious pictures. 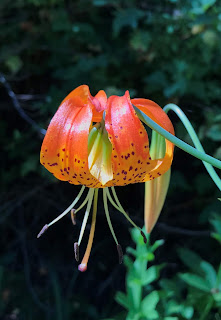 I was looking forward to a summer of exploring and photography and was in denial over some slight symptoms of the medical disaster that lay ahead. 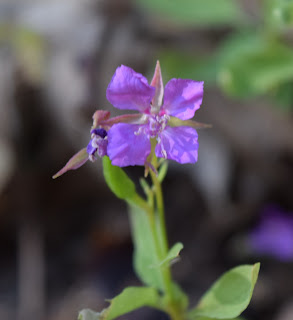 Another springtime stimulus that I captured with my iPhone camera was the Diamond Clarkia at the edge of my driveway.  These beauties have diamond-shaped petal tips, and the overall shape of the inflorescence is also a diamond, or more mathematically correct, a rhombus.  Thus, the scientific name Clarkia rhomboidea. 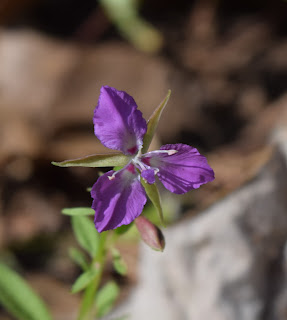 Then an oddball caught my eye.  a specimen with only three petals.  I loved it.  Sort of an inverse of the experience of finding a four-leafed clover when they are "supposed" to have only three leafs - or, more correctly, leaflets. 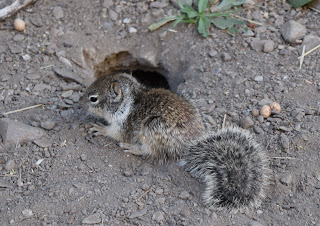 When the resumption of fall semester at FRC was approaching, and I was still toting around a catheter and pee bag, and wondering if I'd be well enough to resume teaching, I spotted this young and innocent ground squirrel on a little-used path behind the gym. Maybe it hadn't yet learned about birds of prey or coyote and mountain lions that inhabit the forests surrounding the college as it didn't immediately disappear down its hole when I approached.  In fact, it let me approach to within a foot with my Nikon and chattered at me a bit before disappearing down its hole. Very pleasant experience.
So, I've had only fragments of the hiking, photographing, and blogging experiences I'm used ot, but am encouraged.  Further encouragement came from cartoonist/artist Brian Fies who visited our classes at FRC a week and a half ago (find The Fies Files) and commented on this blog's most recent post.
Posted by Joe Willis at 1:42 PM No comments: 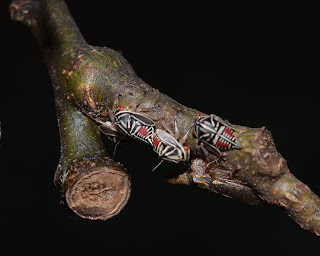 Got these two photos with my phone a couple of days ago on the Feather River College campus. My first sighting of this year, although they might have been around a week or more and remained unnoticed.  I believe they are on the same branch where i last saw them in the fall of 2018. It's the anticipation of such events that stirs me to want to share nature's beauty that is under our noses yet seldom noticed.  Unlike the phenomenon of the swallows returning, on schedule, to Capistrano every year, the return of the Oak Treehoppers does not make me believe in miracles.  It just rreaffirms my feeling of a deep connection with all that lives. 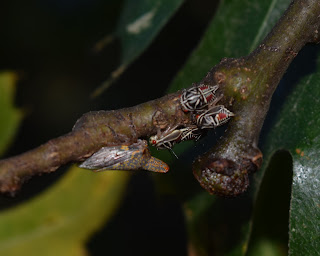 I've written about the annual cycle of the treehoppers in past posts, going back to the year I first discovered them.  When I saw these on campus last week, I had to inspect the Black Oak trees along my driveway.  Sure enough, this morning, feeling confident, I checked a specific branch on a specific tree, with my camera in hand.  I took the photo below and a few others.  Unfortunately, the lighting was bad, so, for a change, the photos I got with the iPhone were better than the ones I got with my DSLR.  I'll keep trying though.  I never tire of looking at the treehoppers, the two very distinct color patterns of the adults and the unique young whose stripes run perpendicular to their body axis unlike the adults. 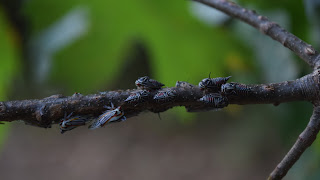 My blogging habit has been dormant for too long.  I hope I'll find that this encounter with the treehoppers will energize me to resume my habit.  My early-morning walk today helped.  AS I walked downtown from my house in the brisk air, I was newly aware of the full moon, the olfactory evidence of skunk activity and the dozens of tallk sunflowers and hollyhocks hanging on unmtil the weather gets truly cold.  Enjoy the Fall.
Posted by Joe Willis at 9:29 AM 2 comments:

Had a delightful dinner meeting with English faculty and English majors last night.  In an environment when college advisement seems more and more oriented toward the monetary and other material possibilities of particular college majors, it was wonderful to be among students who have developed a love for reading and writing for its own sake.  Who realize that all realms of knowledge are inter-connected on some level.  We do not have to succumb to an either/or world.  I was trained initially in biology and math, but also loved to read and write.  In my teaching career, I have wandered among several subjects at the high school level - sciences, math, history, Spanish, English, art, and more - but have gravitated more and more toward English (literature and writing) while maintaining a science perspective on most things.  While I tell people I have a "natural history" blog, I do not feel constrained by subject boundaries.  I am driven by curiosity and the urge to connect with the real world in as many ways as I can.  I can sit and watch a frog for hours.  I can look at frost for hours.  It's especially fascinating to watch frost forming before my eyes, and likewise to watch it sublimating.  Most people are aware of clouds "moving in," but where do they originate?  I am still excited by the first time I became aware of clouds "forming" right before my eyes, and then disappearing as they encountered drier air.
Our students don't have to choose between writing and biology, between business and history, and so on.  They can remain committed to learning about anything that moves them.  They will get smarter and wiser, and their so-called careers will materialize out of that. If they're lucky and/or wise, they won't ever have to choose between learning and living.
A big Thank You to Moon's, a restaurant somewhere in Quincy, for hosting this event.
Posted by Joe Willis at 7:02 AM 3 comments: