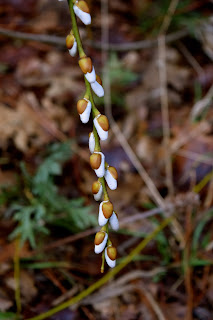 There's supposed to be snow on the ground, but there isn't.  Instead of sitting around wishing for snow - which will not produce results - I find myself thinking "hell, if we're going to skip winter, let's get spring started" then hitting the trails in search of wildflowers.  That's what I did a few days ago, and I found Mother Nature to be teasing me.  Encountered the earliest leaves of Dusky Horkelia, Shooting Star, Death Camus, and Red Larkspur, but no "real" flowers.  However, when I calmed down and found more satisfaction in what I was actually seeing, rather than what I was wishing for, the flowering Pussy Willows (above) seemed more beautiful than ever.  Then I stretched the meaning 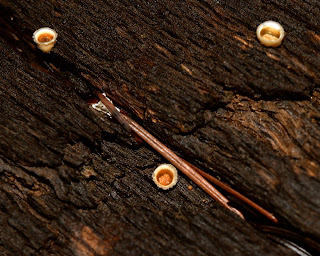 of flower from the strictly botanical to the aesthetic and thought of the Bird's Nest Fungus (above) to be sufficiently flower-like to bring great satisfaction.  One of these days I hope to be in the vicinity of these little wonders when a raindrop lands in one these cups and causes the "eggs," which are actually spore cases, to explode and distribute the spores in every direction.
Meanwhile, I will probably take mini-excursions ever day, hoping to catch the first bloom of Shelton's Violets, Shooting Star, Rock Cress, and other local early-birds.  And, in the back of my mind, continue to plot my first trip of the year to Table Mountain where the excitement of spring wildflowers has already begun.
Posted by Joe Willis at 9:19 AM 4 comments:

A Bug Saves the Day 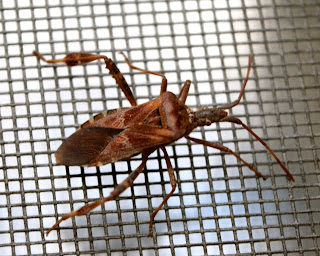 A few days ago I explored the FRC nature trail in search of Shelton's Violets.  They're usually the first wildflowers to bloom out there, but so far all I've seen are the early leaves.  Today was no different.  Well, one difference.  Last time I hiked out there I only had nature notes and photography on my mind.  Today, however, my mind was buzzing with thoughts about a discussion some friends and I had yesterday about the U. S. Constitution.  Is it our guardian of freedom, or is it a document meant to maintain privilege - the plutocracy.  Most people, it seems to me, if they've read the thing at all, interpret it to fit what they think it ought to be, and are not really equipped to say what was intended.  This phenomenon is very apparent in the current debate among Republican candidates for president.
So, as I went on my futile walk in search of blooming violets, I was daydreaming about an essay I want to write for a blog post soon.  My working title will be a rhetorical question:  Is Nature a Republican or a Democrat?
Although I returned home a little unsettled, and having taken NO photographs, I noticed a beautiful bug outside on a window screen (above).  It's a Leaf-footed Bug, a member of the Family Coreidae.  It bears resemblance to the Western Bloodsucking Conenose and other members of Family Reduviidae, known for, among other features, their role in spreading Chagas' Disease.
As a preview of the aforementioned essay, let me just say I believe Darwin's description of the workings of Nature would qualify 'her' as a Democratic Socialist - pretty much left of today's Democrats.
However, a common view of Darwin, especially among those who have not read him, but have somehow been tainted by Herbert Spencer's misinterpretation of Darwin, would place his description of Nature in the Republican (or Tea Party) camp. In his hands-on biological studies, Darwin did not spend much time observing the "red in tooth and claw" stuff, but rather studied barnacles, earthworms, and pigeons.  He wrote a great deal about cooperation and symbiosis.  But, I'm getting
ahead of myself.
Posted by Joe Willis at 3:25 PM No comments: 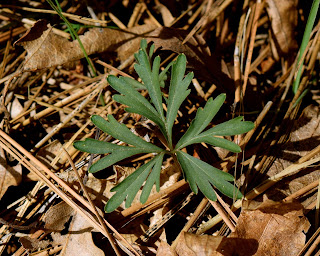 As I pored over my photo archives and notes of the past month, I realized how many "roads" I have not taken, that is, how many blog posts I've conceived, but not birthed.  I decided to rectify the situation, and rather than go back and resurrect some of those posts, I thought I'd first go on a brief new adventure in search of Shelton's Violet (above).  That is usually the first wildflower to bloom on the south-facing slopes of the FRC nature trail.  No flowers blooming yet, but quite a few young leaves of violets have appeared.  These stimulated further wanderings, and whetted the appetite for regular return visits. 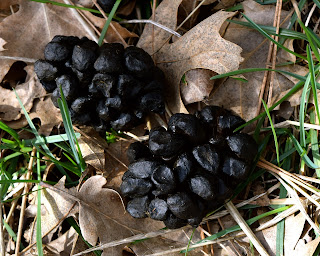 Among other signs of activity were the piles of "dear" poop.  Not a misspelling but rather a way of honoring the role of the deer in recycling the grass they eat and building soil. 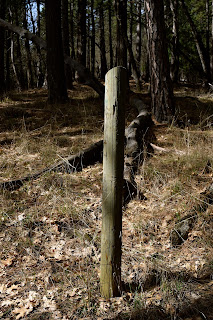 Then I came across a signless-post and decided to invent a new word.  This post is at a major fork in the trail at which point one must decide whether to continue along the loop clockwise or counterclockwise.  Since I had lots of work to do at home, I decided upon a third option, retreat. 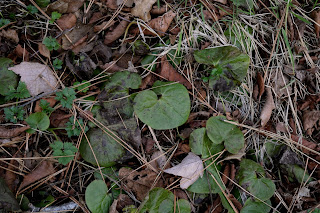 However, I could not return to my truck in a straight line.  I wandered over to where I knew there would be running water and photographed the cordiform leaves of Lemmon's Wild Ginger, a nice plant to view on Valentine's Day. 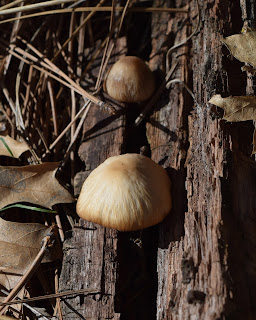 Just above the running water on still-damp soil, were some nice-looking mushroom caps.  Knowing that the most interesting action of the fungi takes place beneath the surface, my old habit of tipping things over kicked in.  Lo and behold, some grayish slime mold and a really interesting fungus (or possibly another slime mold) shone bright red in the setting sun.  All in all, an enjoyable brief excursion and sufficient stimulus to start posting the photos and stories from January and early February - after I grade a few more papers. 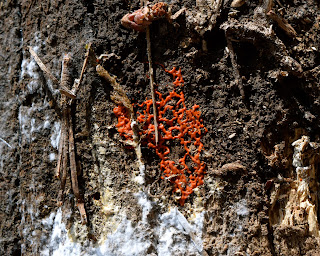 Posted by Joe Willis at 4:30 PM No comments:

Watch out for lazy dogs! 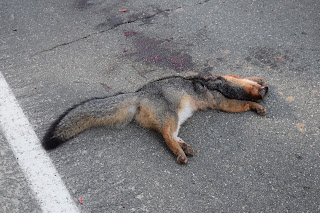 It is not my usual style to make a joke out of death.  However, for many people, seeing a "real" fox under any circumstances is a rare to non-existent event.  When I see a nocturnal animal DOR, I usually always stop to take a closer look.  I marvel at the creature's existence, its beauty - even if somewhat damaged - and contemplate its continuance into the cycle of life with the aid of scavengers.  Ironically, just before I came across this unfortunate specimen, I had bought the day's S. F. Chronicle which featured an archival photo of a fox on the front page - "above the fold" no less. 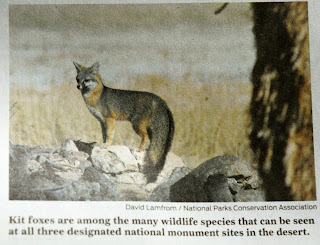 I photographed the photo on the front seat of my truck, and here it is.
This is how my nature photography excursion began.  My goal was to check out the behavior of my new (old) truck on a dirt road - Old Keddie Highway - then head to the Greenville Y which is my favorite spot to record the earliest Spring wildflowers.  Although I found no blooming flowers, I found many signs of emerging Spring, and I declared the trip a success.  It definitely renewed my urge to resume blogging more regularly.  Photos of the remainder of this trip will follow shortly.
Posted by Joe Willis at 12:07 PM No comments:

This blog is not dead, and neither am I.  Just hibernating, although we've had pretty warm weather lately, so maybe it's time to emerge from winter sleep and resume blogging.  Last weekend I hiked with a friend on a short stretch of the PCT out of Belden and saw my first Spring wildflowers of the season.  That really fired me up.  It was Milkmaids, a pretty little white flower in the Mustard family.
I didn't bring my camera, but starting tomorrow it is going to be in my truck every day.  So is my small supply of blank journals.  And, Table Mountain time is just around the corner.
HAPPY DARWIN DAY tomorrow!
Posted by Joe Willis at 5:20 PM 1 comment: