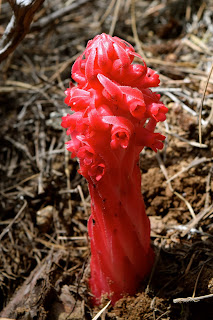 Hiked from Silver Lake to Gold Lake today.  Not sure what possessed us to head up that way on a holiday weekend, but it was interesting.  Very crowded around the campground.  Took brief notice of the amazing amount of junk people bring on camping trips, and savored the thought that most were staying in camp, in tents even, with the sounds of cell hones and other electronic devices wafting over the sounds of chipmunks and birds.  A few yards past the Silver Lake dam, and we were relatively alone for the entire hike.  Tomorrow, I need to "camp out" in front of a closed cafe or the library library where the Internet speed is sufficient to post more photos from the hike.  Here at home, it is pathetic.  It took extreme patience just to load these four.  The Snow Plant above is the first one I've seen this year, and it was fairly well-hidden at the edge of the road to Silver Lake at around 5,000'.  I was lucky to spot it. 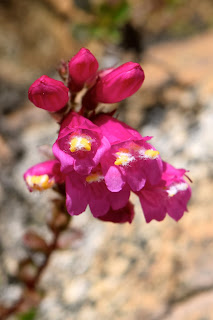 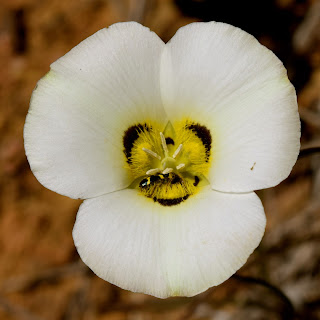 ALso at the edge of the Silver Lake Road, but much lower, maybe around 4,000', were a few Leichtlin's Mariposa Lilies.  This one has a visitor.  I think it was a Checkered Clerid Beetle, but it flew off before I could get a closer look. 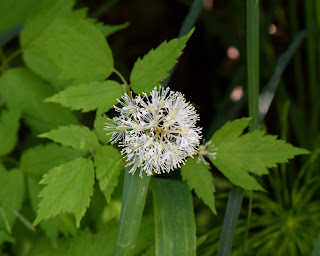 Not the brightest of the group, but the most thrilling to me, was this blooming Baneberry.  This is the first time I've managed to find it in bloom.  I often see the bright red berries later in the season, but forget to check those same spots during the blooming season.  They're not that noticeable because they usually grow in shady wet areas surrounded by other broad-leaf foliage.  The leaves resemble those of wild raspberry without spines.  This time, I remembered that they grow near the popular spring on the Meadow Valley road a few miles out of Quincy.  I stopped to check, and there they were.  I marvel at this plant partly because I seldom find it and partly because it belongs to the Buttercup Family, Ranunculaceae.  You've got to get seriously botanical to see why Buttercups, Columbine, Monkshood, and Baneberry are in the same family.
Posted by Joe Willis at 8:53 PM No comments: 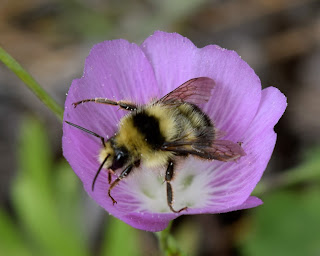 I drove out to Oakland Camp yesterday afternoon to see what I could see.  I had low expectations.  Just wanted to get away from grading essays for a while.  My first stop was by the small stand of Mountain Ladyslippers a short distance past the bridge over Spanish Creek.  As I kneeled down to take a few photos, I heard a voice from deeper into the woods.  Something about Ladyslippers and Coralroot.  I walked up hill to see who it was.  A young, well-equipped photographer was photographing Ladyslippers, some specimens a little less covered with pine pollen than the ones I was photographing.  We chatted a while, and I discovered he had driven here from Redding to take these photos.  I asked how he knew they were here.  he said a natural history blog by a guy named Joe Willis!  That's me!!!  He thanked me profusely for this and other tips he had found on my blog, and he gave me his card.  He's a REAL photographer.  Check out his work at www.wildmacro.com.  His name's Tim Boomer.  His photography is better than mine.  As I remind my followers from time to time, I'm a story teller interested in all things natural.  I supplement my stories with adequate (I hope) photos and sketches, but I know that several of followers and friends are much more serious photographers than I am, and I love to point people toward their work.  Another, who comments here from time to time, is Spencer Dykstra.  After exchanging "warm fuzzies" with Tim, I drove on down the road and got lots of interesting photos.  It's the one above that gave me the idea for the title of today's post.  The bee on a blossom of Checker Bloom looked warm and fuzzy, but I decided not to test my hypothesis. 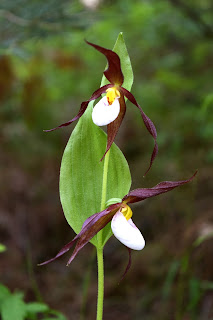 I've been getting inquiries in my email about the status of various wildflowers in our area.  Lots of people inquire specifically about the Mountain Lady Slipper (above), and I realize I am behind schedule.  That is, behind the schedule people began to expect of me when I was posting once or twice a day over long periods.  But it is now the 14th of May, and this is only my second post.  Well, yesterday I got all my semester exams written and printed, and my exams will be administered Monday and Tuesday.  Then I'll start celebrating May more thoroughly on this site.

The Mountain Lady Slippers, Cypripedium montanum, are in full bloom on the road into Oakland Camp.  Most likely they are also blooming along Taylor Creek which crosses Chandler Road northeast of downtown Quincy.  I won't get more specific than that because I don't want to instigate a botanical gold rush. 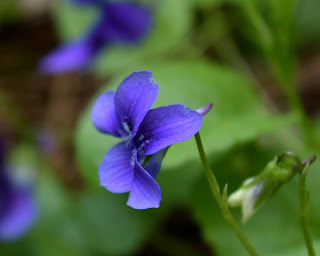 Other May flowers include the Western Dog Violet which are very abundant this year.  I have photographed them on the FRC campus and also near the aforementioned Lady Slippers. 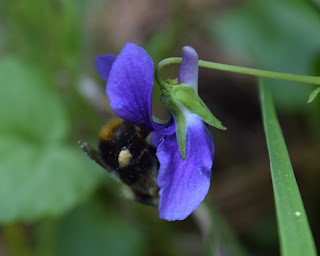 I chased this bumblebee for quite a while.  It seemed to land on a different blossom every few seconds.  It was quite heavy, from the flowers' perspective, so every time it landed the flower dropped by several inches, then sprung back upward when the bee left.  It must of been a fun ride, although not as much fun as actual flying.  I don't really know if bees see things this way. 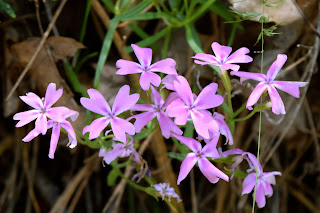 The Showy Phlox are also out on many sunny slopes in the area.  This cluster was seen in the "Pocket" area on the way out to Oakland Camp.
Posted by Joe Willis at 7:25 AM No comments:

On the way down Monument Peak 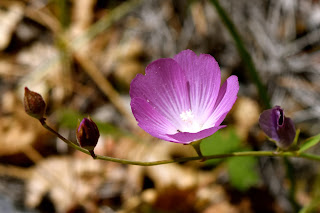 Well, I blinked, and a whole week went by.  I was just now trying to post a few wildflower photos I took last weekend on my way down from Monument Peak (see photo of my in most recent post), but the bandwidth provided by ATT in my neighborhood is so pathetic that I couldn't even upload one photo.  So, tomorrow morning, probably at the coffee shop, I'll post at least one photo of Checker Bloom, Sidalcea glaucescens.  This is a beautiful, crawling vine (or at least prostrate stem) with bright pink flowers.  I saw only one such plant, but others will come, and soon they will be decorated with the Checkered Clerid Beetles.  I hope.  :)