Some Observations on the 5th 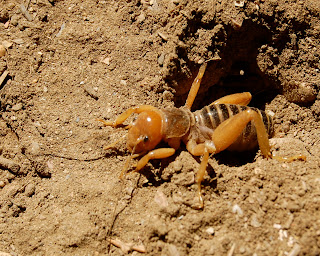 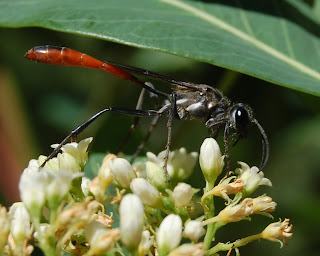 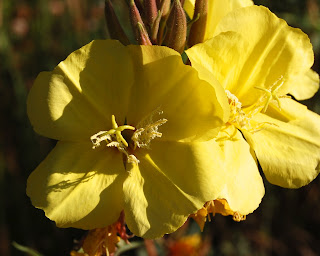 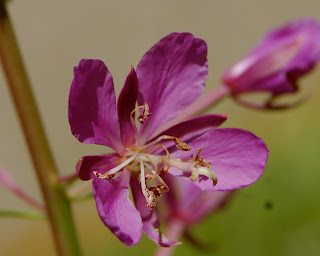 It's always fun to find bugs where you expect them to be, especially when you've promised to show some kids.  This morning, the Jerusalem Cricket I found yesterday was under the same pine round and I showed it to several families on our nature hike.  Nearly regretted it, as the irresistible urge to poke it with a stick almost triumphed.  However, I explained why we needed to leave it alone and why it chose that particular place of residence.  I was also asked to explain what possible good such a critter was.  The gap between me and a person who would ask such a question is huge, but trying to close that gap is the job of the naturalist.  I believe I made a little progress, thanks largely to the great variety of colorful insects and spiders we saw over the next hour.  People had to be impressed with nature's bounty.
At a certain time of day, the gathering of Thread-waisted Wasps on the Indian Hemp is also fairly predictable, at least for a while longer in the summer.  This is such a dramatically beautiful insect that every time I see them I try to get better photos than the last time.
Last, I'm presenting photos of two flowers I haven't shown together before.  The Hooker's Evening Primrose and Fireweed.  Both are now blooming and they are in the same family.  I hope you can see the family resemblance.
Perhaps my most important observation of the day comes in two parts.  The first part is that hundreds and hundreds of music lovers are arriving in Quincy and while some locals welcome this, there is a residual stereotyping of a negative sort among others.  Names like Hippie Fest, skinny dipping, pot smoking, etc., roll off the tongues of many with a decidedly negative vibe.  In my limited observations, I see a pattern of Quincy locals trashing the swimming hole near Oakland Camp off and on in the months before the music festival, then "hippie" visitors picking up lots of bags of trash.  To top it off, as I was entering a fairly remote spot along Spanish Creek on my daily guided nature walk, I saw a recognizably Quincy pickup emerging from the woods with camping gear.   A few minutes later we came across their campsite where they had left their campfire still smouldering.  We all emptied our water bottles on the coals, but that wasn't sufficient.  We called the Forest Service when we returned to camp and showed them where the site was located.  Maybe we saved Quincy from itself.
Posted by Joe Willis at 3:07 PM