A Good Day for Bugs 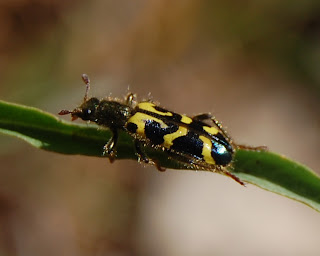 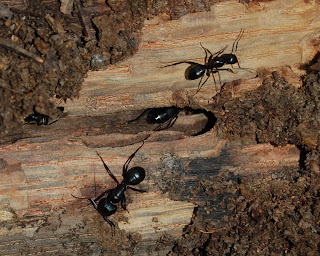 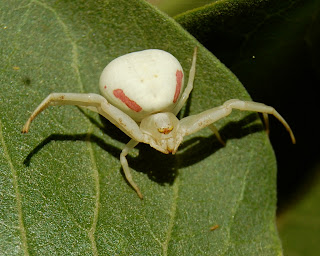 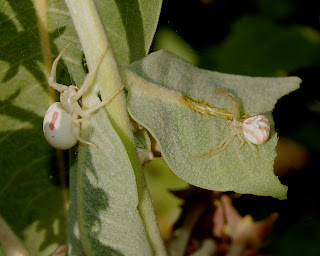 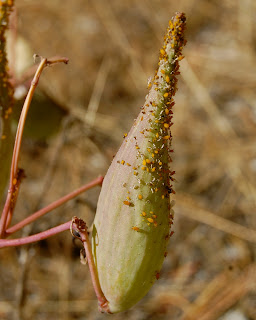 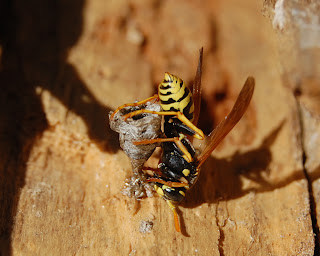 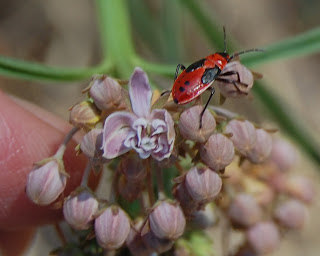 The several species of milkweeds were hosting lots of interesting visitors today.  I started by checking a patch of Narrow-leaf Milkweed about a quarter mile downstream from Oakland Camp.  I didn't see any new bugs there, but I got a few more dramatic photos of the ones that are usually there, like the Checkered Clerid Beetle in the top photo.  Met a nice couple from Petaluma there who probably thought I was crazy getting close-up photos of bugs on weeds.  In dry areas away from the creek, I incessantly tip over small logs, rocks, and pieces of bark.  Most were bone dry underneath, but a few harbored interesting insects and spiders.  Carpenter Ants are nothing rare around here, but I particularly liked the composition of the second photo above.  By the way, click on any of those for close-up views.  As my regular readers know by now I can't get enough of the Goldenrod Crab Spider.  The next two photos are today's, the second one including another type of Crab Spider I haven't yet identified.  In a shady, humid area by Tollgate Creek, I found a nice specimen of the Long-jawed Orb Weaver, a skinny spider I've seen ever since I was a child but until now never identified.  Then I checked many Purple Milkweeds, which are now showing seed pods, and found one with a good-sized herd of aphids, the yellow kind I'm finding on all the species of milkweeds.
These photos aren't in the order in which I took them.  The Yellow Jacket in the next to last photo was under a small log in my front yard.  It's been in this position for several days, building its paper nest at a microscopic pace.  Last, I'm back at that patch of Narrow-leaf Milkweeds again where I found a beautiful red bug, not yet identified.  I'm wondering if it could be a developmental stage of the Red Milkweed Beetle.  Can't find any photos of it, and I didn't collect any for further research.  I was satisfied simply to see its beauty.  There were several of them on this particular plant.
A Correction:  In several recent posts I have identified a beautiful black and red wasp feeding on Indian Hemp as an Ichneumonid.  Turn out it's a wasp of a different family, the Sphecidae, commonly known as Thread-waisted Wasps.  Now my incorrectly-labelled wasp photos are clogging up cyberspace.  I guess they'll eventually get corrected.
Posted by Joe Willis at 8:49 PM