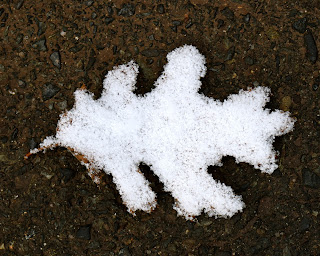 I took no photos today.  Today was all about eating.  The above photo is my favorite memory of yesterday, a Black Oak leaf keeping the snow from melting long after it had melted off the pavement.  There's a physics lesson in that.

Posted by Joe Willis at 8:53 PM No comments: 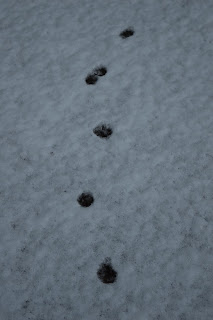 Cat footprints in the freshly fallen snow reminded me that there's a lot more going on at this time of year than meets the eye - or most eyes.  I got these two photos around sunrise by my car, but it was so cold, I didn't bother to bring my camera with me to work.  Wouldn't you know, the snow-covered "green" on the way up to the classrooms was decorated with many signs of early morning activity.  Most prominent were the many wild turkey footprints.  There were also deer prints, Raven Prints, and photogenic leaves and mushroom caps covered with snow.  By Noon, the snow had melted and taken all this evidence with it. 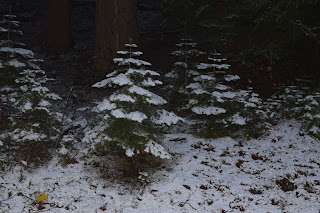 Young firs at the edge of my driveway looked really nice with a fresh layer of snow.  No need for a snowblower yet. There was fresh bear poop on Boyle and Coburn Streets, but no tipped-over trash cans.  It was nice to see the snow, but not all of my students from Florida were glad to see it.

Posted by Joe Willis at 6:32 PM No comments:

Signs of the Times

I was listening to Science Friday on the radio this morning.  Interesting discussion by two map-making experts who are involved in re-designing maps of urban transit systems.  It turns out the new mobile-device-wielding traveler likes to be told, step by step, how to get from point A to Point B, but is not so concerned about knowing where he is at any given moment along the route.  In a sense, these new maps are not really maps.  They are diagrams that simply identify key points along a route, and perhaps estimated times.  I had bits of this program rattling around in my brain when I got out of my car to look at a Forest Service map (above) that informed me where I was.  No surprise.  I was here!  And I knew that.  It would have been impossible for me to be anywhere else, particularly there.  I'm always here; never there.  So, if a person on the London, or New York, or San Francisco subway asked a fellow passenger "Do you know where we are?" it would always be appropriate to say, "Yes.  We are here."  So, the above Forest Service sign didn't tell me anything I didn't already know. 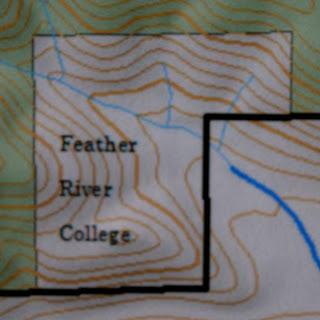 This experience obviously put me in a mischievous mood.  So, when I looked at another part of the map, a part representing Feather River College, I thought "it has never looked better!"  No gopher holes, no litter, no dog poop and no outdoor ash trays.  Just topography and a nice, meandering creek.  I wish we could start over and preserve the natural watercourse and some of the wetlands.  No lawns.  However, I must admit, I see more wildlife on campus than I do anywhere else around town.  I especially enjoy the Ravens. 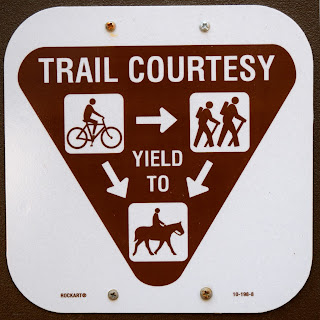 This last bit was posted right next to the above-mentioned map.  It's not often that one sees a sign favoring older ways rather than the new.  Here horses have the right-of-way over bicycles and humans, although there are usually humans with the horses.  I'm somewhat partial to humans, so I'm ambivalent about this hierarchy.  I don't like hiking through horse poop.  And I definitely don't like to be forced to dodge out-of-control, downhill bicyclists, and that is happening with increasing frequency.  I really appreciate the concept of "trail courtesy" and I still experience a lot of it around Quincy, despite my mild grumbling about some trail users.  It's probably all a function of population density.  That's why I hope Plumas County doesn't grow in population.  To most economists, that's backward thinking.  But I'm with the late Ed Abbey when he said "growth for the sake of growth is the ideology of the cancer cell."
Posted by Joe Willis at 8:44 PM No comments: 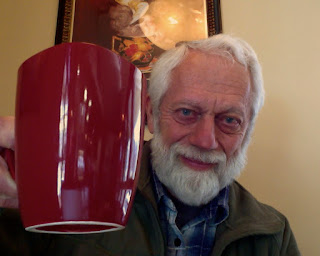 Here's a mugshot I took a year or two ago.  Today, I'm drinking to freedom of speech and press, such as they still exist.  My students will be doing research papers on Censorship.  I do the research, too, always expecting to discover new things.  Some of my colleagues and I are discussing censorship, and in the midst of these discussions, a quote by the late great Chief Justice Earl Warren, has surfaced.
"The censor's sword pierces deeply into the heart of free expression."  I like that.  Ironically, the word "sword" contains the word "word," although there's no etymological connection that I can find.
As is the usual practice in this blog, I will explore connections between my teaching of English (critical thinking and writing) and the natural world.  I'll be looking for activities in nature that may be seen as analogous to censorship.
I stole the title of today's post from the late Edward Abbey.  I don't know if he stole it from someone else, but it seems likely.
Posted by Joe Willis at 12:20 PM No comments: 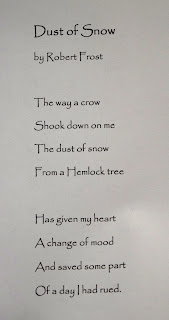 We got the first "dusting" of snow at our house Monday night.  I didn't hear rain during the night, so it was possible there was no precipitation at all.  I was delighted to find a new layer of the "white stuff" on the ground when I woke up around sunrise.  I was immediately reminded of one of my favorite short poems by Robert Frost.  I decided to see what has been written about this poem that I first learned about in junior high when Frost was still alive.  It turns out a lot of really stupid stuff shows up when one Googles "Dust of Snow, analysis."  So many common stereotypes of crows and snow, mistaking Hemlock trees for the Poison Hemlock (a small plant, not a tree), the presumption that Frost included many "opposites" in the poem.  Opposites such as the evil crow inadvertently causing a moment of pleasure.  There's no direct evidence in the poem about why the narrator (who may or may not be Frost; we have to assume not) might have "rued" the day until receiving the pleasurable "dusting."  In any case, I've never had a negative feeling about crows.  In fact one of my favorite memories from childhood is of my Uncle Ray, a WWI veteran, taming crows in his back yard while they remained free.  He'd go outside with a dish of "crow food" and call to them.  Two of them, as I recall.  They would swoop down out of the trees and land on his outstretched arm and gobble up the food.  I never heard Uncle Ray say anything bad about crows.  He loved them, and so did I.  Where I live now, I have more contact with Ravens than I do with crows.  Crows in the downtown parking lots, but Ravens in the surrounding forest and in the trees on the upper campus of FRC.
The poem, to me, represents an uncomplicated peacefulness.  I have fond memories of hiking and skiing in the "back country" during snow storms - places so quiet that I could actually hear snowflakes landing. 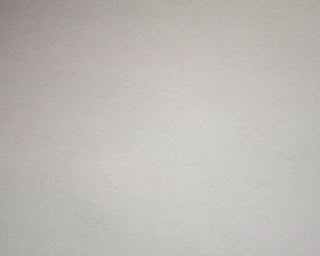 Then my thoughts turns to humorous memories, such as creating the above painting of a polar bear hiding behind an iceberg during a blizzard.  It was actually quite easy to draw.
I suppose if I'd had my camera handy when I first left the house, I would have taken a couple of photos of the front yard and the dusting of snow on top of my firewood.  Then this post might have turned out differently.  Hopefully, there will be more snow soon so I can experiment with both photos and words.
Posted by Joe Willis at 2:20 PM No comments: 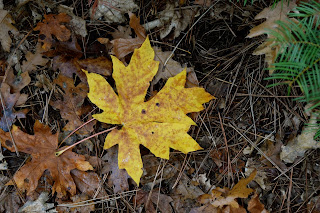 I grew up not far from the famous fall colors "mecca," the Mohawk Trail.  Since I've been in California I've made a lot of photos of fall colors, but in recent years I've begun to enjoy zooming in on individual leaves more than taking the more popular panoramas of whole trees or whole hillsides of colorful trees.  Here are a few from around the county courthouse.  Above is a leaf of Bigleaf Maple, measuring around 9" across.  Like every other leaf, a marvel of engineering - without an engineer. Here's a typical leaf of Thimble Berry.  They tend to stay green later into the season than the maples, then suddenly turn brown.  This one's around 7" across. 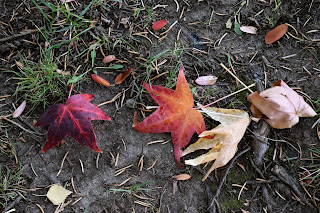 On the northeast corner of the courthouse lawn is a popular Sweetgum, or Liquidambar, whose leaves turn many great colors, mostly on the warmer end of the visible spectrum.  Reds, oranges, yellows, and combinations. 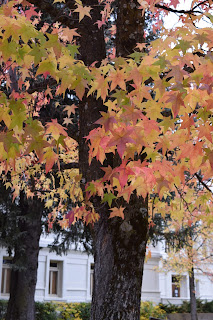 Liquidambar leaves usually change colors while still attached to their trees, although they often continue to change once they're on the ground.  Some deciduous drop their leaves while they are still green, the the color changes take place on the ground.  I've noticed that with White Alders and Cascara Buckthorn. 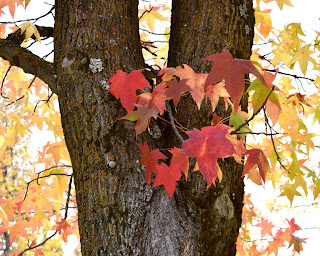 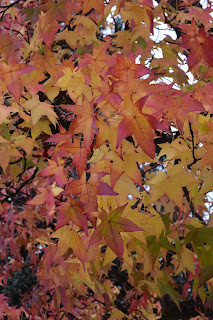 I'm still thinking snow is just around the corner and that I won't be taking any more leaf photos this season, but you never know.  Next I plan to post some photos from the same walk through the neighborhood, but ones whose shape and venation are described as pinnate, or feather-like.
Posted by Joe Willis at 6:55 PM No comments: 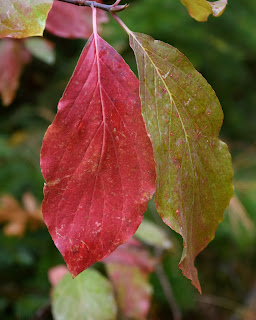 A walk in the woods by my house gave me what might be the seasons last look at certain colors and features.  One forecast calls for snow by mid-week.  I'd like to be optimistic about that, but....
Most of the dogwoods in this area have dropped their leaves, but a few trees in my neighborhood still show some color. (above) 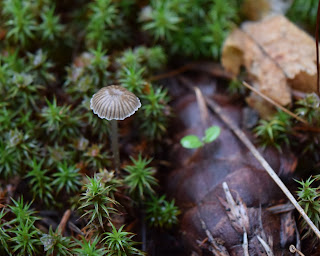 In keeping with my love of small things, here's a really cute little mushroom surrounded by moss, and next to a Douglas-fir cone for scale. 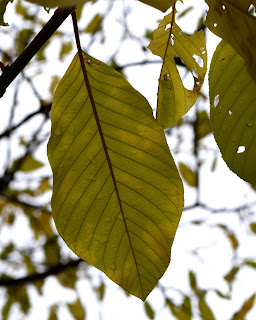 A leaf of Cascara Buckthorn lit from behind.  The ones by my driveway have lost nearly all their leaves which makes each remaining leaf seem special.  After this walk, I went down by the Plumas County Courthouse where there's lots of fall color - Mountain Ash, Sweetgum, Maple, Sycamore, Incense Cedar, and more.  Will post some of those photos tomorrow.
Posted by Joe Willis at 5:57 PM No comments: