Solanaceae, a family that keeps you on your toes 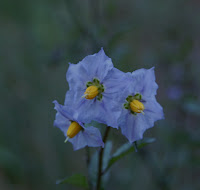 I've read that when our country was founded, most folks believed tomatoes were poisonous, and that Thomas Jefferson, who knew otherwise, once ate a tomato on the steps of the US Capitol to prove their safety. I grew up hearing that the "eyes" of potatoes were poisonous, that green skin on immature potatoes was poisonous, and that tobacco was bad, bad, bad.... Turns out all of these things are at least partly true. All the plants mentioned, as well as eggplant and all sorts of peppers, are in the same family as the poisonous nightshade (above left), and parts of all the edible plants mentioned are poisonous, as are the fruits when not ripe. Note the similarity of the nightshade flower to that of the domestic tomato (above right). In fact, the flowers of all these plants are similar. I once wrote a poem titled "Solanaceae" in which I marveled at this family's variety of useful, edible, and harmful plants. If I can find the poem, it will be in my next post.
Posted by Joe Willis at 5:58 PM No comments:

Posted by Joe Willis at 5:56 PM No comments:

Here is the promised assortment of my photos of local species in the buttercup family. The other day, while sitting in the forest near some columbine, I entered into my journal, "I belong to a species that has no trouble grouping this diverse assortment of flowers into the same family, yet can't seem to get comfortable with its kinship with chimpanzees, gorillas, orangutans, bonobos, etc., not to mention Neanderthals." I am in possession of a Natural History text used at Harvard a little over 100 years ago that divides the human species into categories with descriptions that are shockingly racist. For example, it states that there is no evidence that Africans have a soul. That happens to be correct, but where is the evidence that any humans have a soul? :)
Posted by Joe Willis at 10:40 AM No comments: 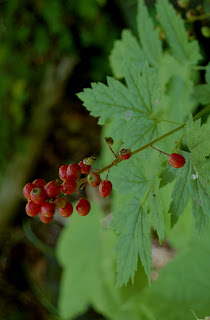 I've been away for a while, and can't figure out how to rotate this image 90 degrees. Perhaps you could tilt your head to the left? Anyway, this is baneberry, a member of the buttercup family, Ranunculaceae. The buttercups are familiar to everyone, but based on the appearance of their flowers, who but a trained botanist would guess that columbine, larkspur, monkshood, clematis, and anemone, among other diverse flowers are in this family, too. Some species are edible, some have medicinal properties and some are deadly poisonous. In fact, a species of monkshood found in Asia is considered the most poisonous plant in the world. My fascination with the species found in our area is never-ending. Discovering their various pollinators is a study in itself. Columbines, for instance, are pollinated by hummingbirds or moths, usually a specific species of animal pollinating each species of columbine, their beak or proboscis perfectly fitting the particular flower. When Darwin discovered these pairings, then found a columbine in South America with spurs several inches long, he predicted that eventually a hummingbird with a very long beak to match would be found in the vicinity, and it was!
My next post will include photos of my favorite members of the buttercup family found in Plumas County.
Posted by Joe Willis at 6:55 PM No comments: