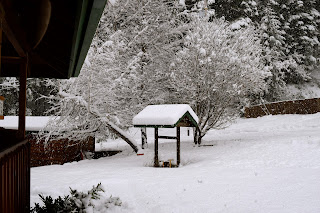 Looks like about a foot, but I don't think they had rulers back then.  But it matches my foot, and it's still snowing.  I was about to write "we return to normal," but I think normal is undergoing revision. 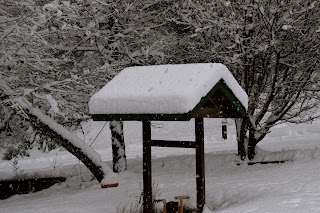 I got my 2WD pickup stuck at the side of my driveway, then went out to do some necessary errands in m wife's AWD Subaru.  Although I had no trouble getting around, the other drivers scared me.  A woman in a small red sedan tried to change lanes in front of me and did a 360.  Luckily, I had enough traction to avoid her, but I couldn't help but wish I had avoided her big smile.  Since there was no collision, she'll probably remember the event as fun. 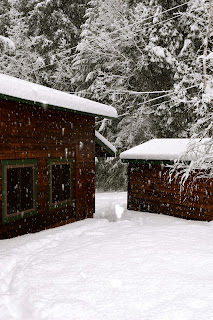 This shot reminds me that I haven't thought about snow loads for several years.  With another storm forecast for latter half of the week, I am thinking about snow loads again.  Much needed moisture is welcome despite the surprises and inconveniences.
Posted by Joe Willis at 10:00 AM No comments: 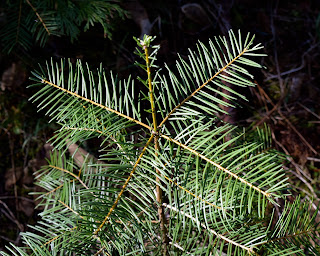 A young White Fir on a trail in Boyle Ravine. Made me think about a Bob Dylan song I first discovered on a Joan Baez recording.  When I walked by it the first time, there was a single, dead Dogwood leaf resting on it.  On the way back, it was gone.  The ground below the sapling was covered with last season's Black Oak and Big Leaf Maple leaves with a sprinkling of Dogwood.  It felt good to be in a place that reminded me that I was enjoying a moment in time in a place where some things have not changed for thousands of years.
Posted by Joe Willis at 6:51 PM No comments: 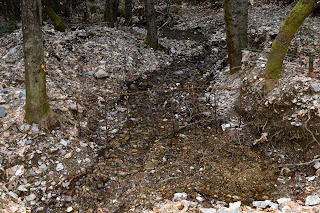 Took a short walk up Boyle Ravine this morning and came across this "fence."  It was apparent that is purpose was to prevent fallen branches and other debris from clogging the culvert under the dirt service road.  That makes sense from a water management standpoint.  If the culvert got clogged, water would build up upstream from the road.  Eventually it would overflow and break through the road and flood residences downstream.  But building the road in the first place invited the problem. There are many complicated issues with managing Boyle Ravine which was threatened by the huge fires at the end of last summer.  However, for me, on this casual walk, it stimulated memories of Frost's poem, Mending Wall, in which the narrator questions his neighbor about why do we have this wall between us anyway.  Every winter "something" tries to tear it down.  he question is posed several times and the neighbor responds the same every time: "Good fences make good neighbors." That neighbor probably never visited the USA/Mexico border. 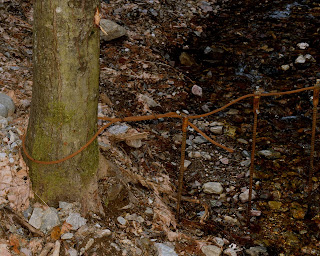 One stirred memory usually leads to another.  I grew up among New England's stone walls, so I remember why they were built, and used to enjoy running across the tops of them until one day I tripped and smashed my forehead on my way off the wall.  But walls mean something different to me now.  As fourth-grade engineers, we used to enjoy building little dams across streams and raising the water level a few inches to maybe a foot. One day we found a spot on a stream with high banks and thought we'd try to build a taller dam, just to see if we could.  When the water depth reached at least three feet, after a long afternoon of rock work, the dam burst and flooded a neighbor's corn field.  We were very frightened of getting caught and ran quite a ways before we were pretty sure no one was chasing us.  An experience with power over nature.  For some people, there's never enough power and hubris.  Thus, we have the Oroville Dam fiasco.  Now I mostly see dams, fences, and walls as dividers between peoples. I also remember in high school days crossing from Vermont into Canada dozens of times with no more inspections than a quick look at my driver's license.  Gone are the days.
Not too long ago, I crossed easily into Tecate, Mexico, and even Tijuana.  I wouldn't even try it today.

Posted by Joe Willis at 6:42 PM No comments:

Trying to understand the past 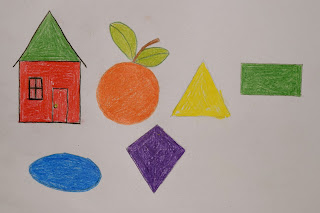 I'm reposting these two images from my January musings by way of explaining the absence of posts for nearly a month.  I've re-named the above image "Age 6" and the one below "Age 70 something." 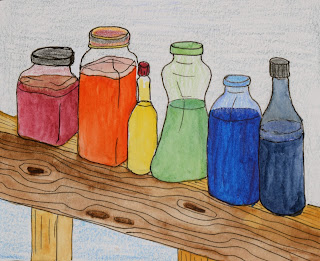 The first clearly is connected somehow in my memory bank to the second.  Also rattling around in the mix is the influence of Richard Dawkins' book Unweaving the Rainbow."  The central issue in that book was the question of whether scientific understanding of natural phenomena enhances or diminishes one's experience of said phenomena.  Newton's demonstration that white light (AKA sunlight) is composed of a mixture of many wavelengths (colors) that can be separated as by a prism or in nature by raindrops and mist.
These thoughts are all connected to my attempt to put together a kind of memoir of my life's experiences in education as student, parent, and instructor.  Wish me luck.  See the column to the left of this post for another version of this update.
Posted by Joe Willis at 8:09 AM No comments: