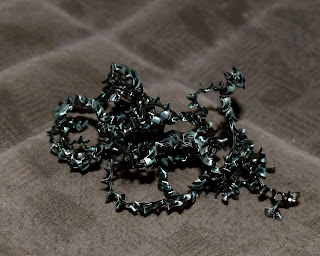 In wetter years past, I've found mushrooms growing out of the floor mats in my van.  I live on a north-facing slope, and  I park my van in a place that never sees the sun in winter.  I haven't had a mushroom crop these past few dry years, but now I have this growing on one of the back seats!  I wonder what the rest of winter has in store.

Posted by Joe Willis at 6:30 PM No comments:

The Pond: Memories of Hypothermia 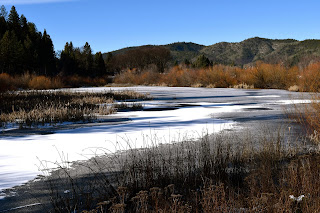 More - when my core temperature returns to normal.  The memories make me shiver. 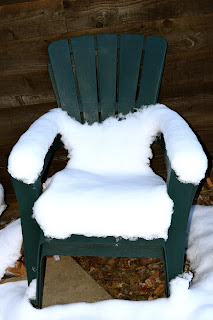 No, not this snow.  The clean snow in the plastic lawn chair reminded me of an angora sweater, and for a moment I was visited by a childhood memory of eating snow and licking icicles wherever I found them.  But I resisted the urge, for this discarded chair sits right below the edge of my shed roof which continually drips various substances I do not care to ingest.  However, a few minutes of memory is often a great way to start my day.  I'll get to the "dirty snow" shortly.
On December 31, I was impressed by how many media, including our local weekly newspaper, take the occasion to list "the best of" or "the worst of" for the year 2015.  Then I looked at my blog and realized I had fallen far short of my goal of averaging one post per day for the year.  That led to a resolution which was immediately threatened by my poor internet service.  I had taken several photos and notes on ideas that would carry me through the first week of January, and hopefully an improved habit.  The above photo is the first of these.  But I wasn't able to get online for more than a few brief moments on the 1st and the 2nd.  Frustrated, I agreed to do a family errand by driving to Chico on Saturday, the 2nd.  I brought my camera.  For the first several miles, the scene that made the greatest impression was the roadsides covered with dirty snow.  Freshly fallen snow, to me, is one of the most beautiful phenomena of winter, but the dirty snow plowed off the roads is one of the ugliest.  10 miles out of Quincy, I came to a junction known as the Greenville Y to discover that Highway 70 through the Feather River Canyon was closed due to a rock slide.  But the errand had to be done, so I headed toward Chester and planned to go to Chico by way of Highway 32, which the man in the bright orange vest said was open.  As I drove by Lake Almanor, the snow on the roadsides was cleaner, but was laced with snowmobile tracks.  So, I knew the air was not as clean as it looked.
This alternative route included some spectacular scenery, as always, and some very impressive icicles, both stalactites and stalagmites, on the roadside rocks.  But I was mostly thinking about having wasted around an hour and two extra gallons of gas.  I did not stop to take pictures.
To top it all off, when I got hungry for lunch at Barnes and Noble, I saw that they didn't really have anything good for lunch.  Mostly sugary stuff.  So, frustrated again, I feel for fast food in the form of a Carl's Jr. chicken sandwich with fries.  For the rest of the day I felt like there was a brick in my stomach.  There, I got all that off my chest. I hope you enjoy the photo of a white sweater in a chair.
I am recovered from yesterday, I think, and I just came back from a nice hike with my wife and the dogs.  Now I'm determined to share a few more photos and ideas today and resume my one-a-day habit.  Next: memories of falling through the ice.