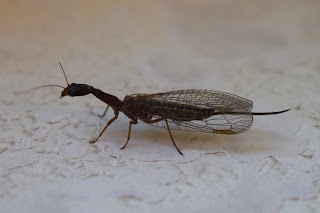 Snakefly stuck in fresh spackle on my windowsill.  The "rest of the story" will be posted later.  It's a "living fossil."  How's that for an oxymoron?

Sunday evening, 7/24.  This dramatic-looking insect is superficially similar to Lacewings of the Order Neuroptera, but the latest consensus is that they are a more ancient group and are placed in the Order Raphidioptera.  When it is called a living fossil, like the Horseshoe Crab, or a plant called Horsetails, it means that today's extant forms closely resemble those in the fossil record from many thousands of years ago.  In the case of the Raphidioptera, that would be around 140 million years ago, well before the extinction of the dinosaurs - that is, the dinosaurs other than today's birds, which are dinosaurs.  Also, well before Noah's Ark, which most Ark-believers place at less than 10,000 years ago.  I wonder if any Snakeflies got on board that vessel

Just a few days after granting myself a sabbatical, due to lots of school work and installing new flooring and painting the interior of our home, the above Snakefly landed and got stuck in a freshly spackled windowsill in my office.  I just had to take some pictures and post one here.  I almost got further carried away when my son found a Hummingbird Moth trapped in the globe of one of our porch lights.  We took the time to free it, but no photos.  Needed to get back to aforementioned works in progress.
Posted by Joe Willis at 7:00 PM No comments: 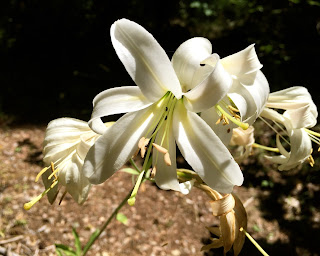 I'm beginning to think that the secret to finding scenes like this is to forget to bring my camera.  I've been walking by this spot in Boyle Ravine for ten years and have never before seen Washington Lilies.  Today, while walking our dogs up the Ravine, there were two fully-blooming Washington Lilies, each with a cluster of 6 blossoms, right at the edge of the trail.  I saw the stems and leaves a couple of weeks ago and assumed they were Leopard Lilies which I've seen here often.  But they bloomed over the weekend and are Lilium washingtonianum.  Fortunately (I can't believe I'm saying this!), my wife had her camera.  I have this Luddite resistance to taking photos with a phone, just like I initially resisted digital photography.  But film is essentially gone, and I am getting used to the advantages of digital.  Maybe some day I'll be taking photos with a phone, but so far I'm resisting even owning one.  Click on the photo for a closer view.  Extraordinary plant.
Posted by Joe Willis at 1:51 PM No comments:

In pursuit of the Ctenucha moth 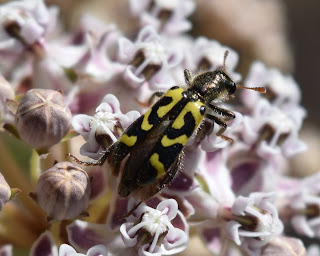 On my way to areas that usually have lots of blooming Pennyroyal, I was dismayed to see how many of my favorite weed-viewing spots had been blitzed by the Road Department weed-eaters. I especially wanted to check on the status of the several species of Milkweeds that are still blooming.  When I got past Oakland Camp to an area near Gilson Creek, things started looking up.  While the Purple or Heartleaf Milkweed had already gone to seed, the Narrowleaf Milkweed was blooming in abundance and had many insect visitors.  The above photo is of a Checkered Clerid Beetle.  I got the shot as she was preparing for take-off. 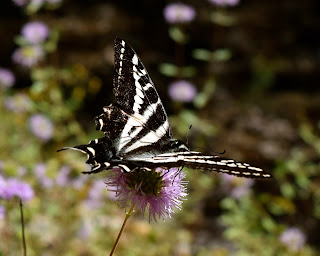 The first patch of Pennyroyal I came to had lots of bees and Pale Swallowtail Butterflies (above), but no Red-shouldered Ctenucha moths.  AT least none that were landed.  Some small black moths or butterflies were flitting around, but none landed long enough for me to get a close look. 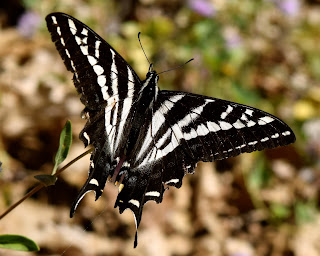 I should have been satisfied because the Swallowtails are actually a lot more colorful.  I suppose it is the relative rarity of the Ctenucha moths that makes them a top goal. 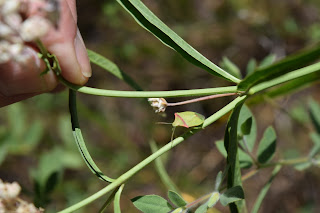 Back to the Narrowleaf Milkweeds, I was hoping to find some Monarch caterpillars or crysallises, but had to settle for the Pentatomid bug (above), and a pair of Mating Clerids (below). 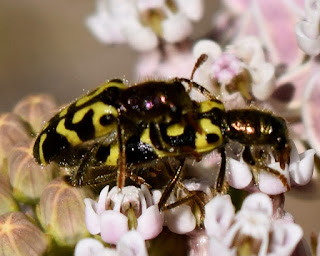 Finally, on the Indian Hemp (also a milkweed), I found a Crab Spider. 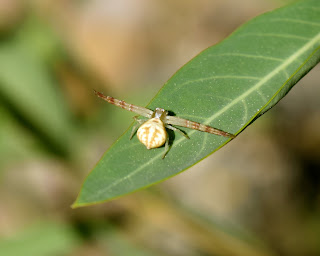 These last two butterflies were meant for a June post, but suddenly it's July!  These are two different species, but very similar-looking.  The first is Lorquin's Admiral (below), and the next is a 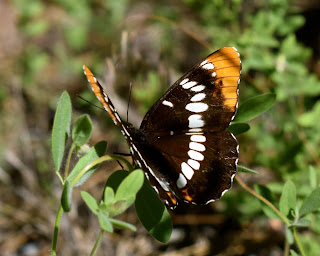 California Sister.  The only obvious difference is the black margin around the orange wingtips, or the lack of it. 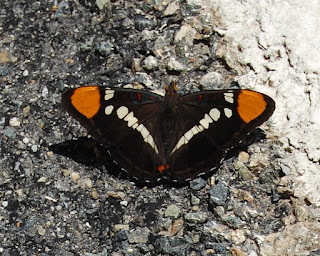 Finally, another June shot, a blooming Checker Bloom.  Click on this one for an enlargement 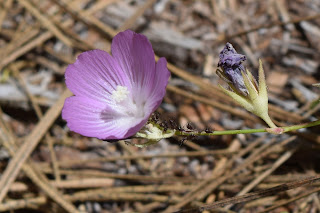 and you will see the nice crop of aphids which I didn't notice until I viewed it on my 15" screen.
Even though I haven't yet got a good shot of a Ctenucha moth, it was a pretty good start for July photography.
Posted by Joe Willis at 3:25 PM No comments: