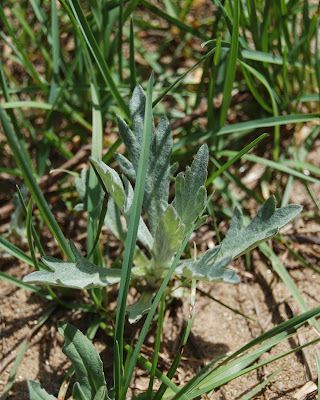 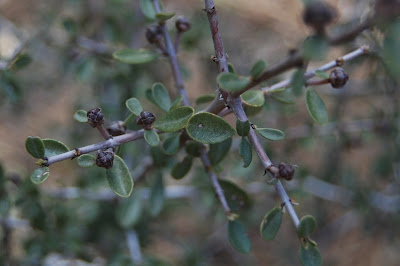 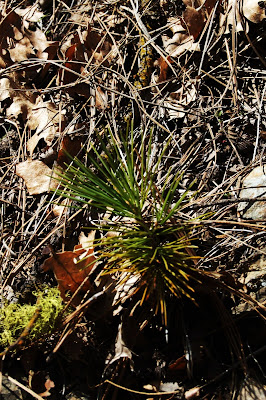 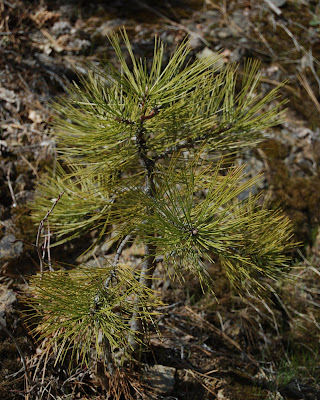 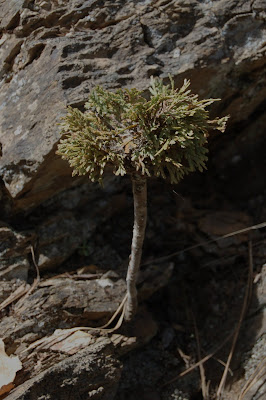 Like most people, I pay more attention to flowering plants when they are flowering. However, since Spring has been delayed this year by a series of snow storms, my anticipation builds and I find myself looking for signs of flowers to come.
On my brief exploration around Oakland Camp yesterday, I came across a patch of young Mugwort (top photo). It's an Artemesia, like Sagebrush, and has that same greyish-green look and a similar aroma. The flowers will arrive a month or so from now on top of stalks that can be up to four feet tall, although the flowers are not at all prominent. Whenever I see Mugwort, I chuckle about memories of herbalists making astounding claims for this plant. They reminded me of hearing people around Roswell, New Mexico, talk about flying saucers and aliens. To make a long story short, I enjoy this relatively natural environment so much with the aromas of spring and the various emerging wildflowers, insects, and birds, that I do not find compelled to look for a plant that will improve my dreams.
Although I was mainly looking for signs of wildflowers, I enjoyed finding tiny trees that had just broken ground. It's fun to recognize them in the earliest stages, sometimes with a seed coating or a split-open acorn still clinging to the young plant. The two young pines above are examples. In the photos, I can't clearly count the needles per bundle, but I seem to recall one was Ponderosa Pine and the other was Sugar Pine. As adults they're quite easy to distinguish. The former has three needles per bundle and is a member of the "yellow pine group" while the latter has five needles per bundle and belongs to the white pine group. They're all of the genus Pinus and family Pinaceae. Further, the needles of the Ponderosa tend to have a yellowish-green cast while the needles of Sugar Pine are more toward the blue end of the green spectrum. Of course the cones are greatly different as is the texture of their bark, but we're just talking about babies here.
The second photo down is Buckbrush, loaded with buds that will burst open soon and add to the Springtime aromas.
Last, we have a baby Incense Cedar. One growing out of a crack like this would appear not to have access to much soil and not be long for this world. However, as in the case of the small Douglas-fir I often photograph by the Greenville Y, it might adjust. I could grow very slowly and create a kind of bonsai effect and, say, become 20 or 30 years old while only a couple of feet tall. Or, with the assistance of some weathering, it could split the rock and gain access to the soil below, and outlive us all.
Posted by Joe Willis at 8:57 AM