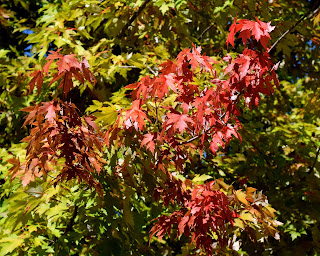 Some of the more famous maples around town have not yet begun to show "fall colors," but there's one tree on Jackson Street that I drive by every day that is ready for Fall.  I have been driving by this tree every day, so today I decided to stop and get some pictures. 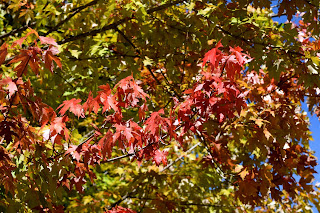 In earlier posts I mentioned my goal of photographing the Skippers that have been visiting the Rabbitbrush on the FRC campus.  Saturday evening they had gone into hiding by the time I got there.  Sunday evening, the bushes were already in the shade, and last night, the same.  But, this afternoon, around 3:45, conditions were just right.  The bushes were in the sun, there was little or no wind, and there were several dozen skippers on the freshest-looking bush.  It's my bedtime - I have to get up early tomorrow.  So, I'll need to wait until tomorrow to post the photos.  I'm excited about them.  I 'll also post some photos of a Snowberry bush that intrigued me because on part of the bush, the flowers had already gone to seed, other parts had the white berries, but most of the leaves were somewhat chewed up, and, finally, a small branch in the sahde of the others and near the ground had fresh flowers and buds and unblemished leaves.  It was like seeing a whole season on one bush.
Posted by Joe Willis at 9:05 PM