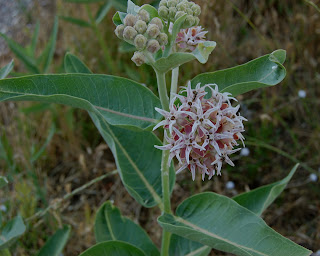 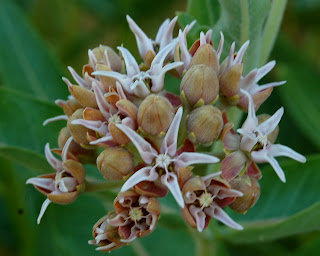 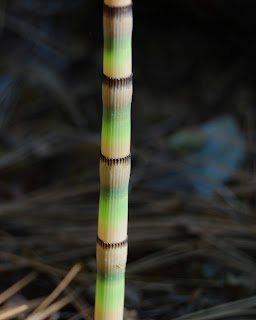 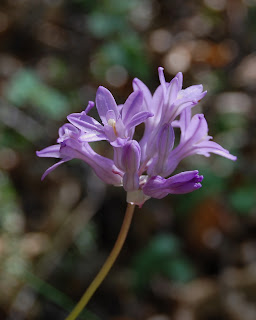 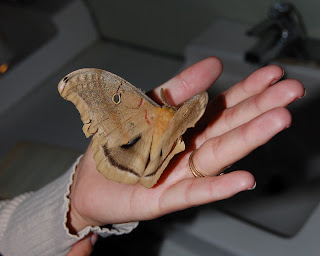 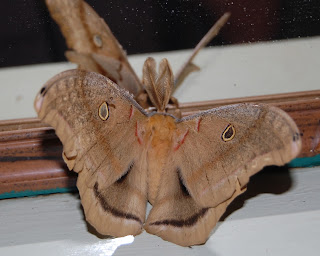 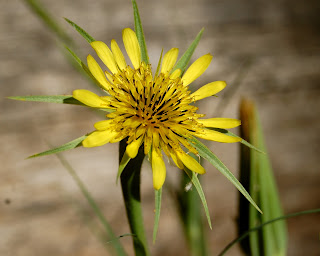 I've been seeing the Showy Milkweed budding for a couple of weeks, and only a few days ago some buds were showing a little pink.  While the road department and some landowners are busy cutting down everything at the roadsides, I'm cruising around with excitement over impending blooms.  So, yesterday I posted a couple of photos from last year's archive with a kind of before and after (blooming) treatment and said they'd be blooming soon.  Imagine my excitement when on my way to work at Oakland Camp I saw my first patch of blossoms.  This was at the side of the road about a half mile from the western end of Chandler Road.  They're aren't yet blooming around the camp nor on Lee Road by the fairgrounds, but the top two photos above were taken this morning at 8:00 a.m.  On the way into camp I also saw a nice patch of Horsetails, which are a type of fern.  A colorful fertile frond is shown here.  Then what I called Bluedicks in an earlier post are still blooming, but a botanist friend corrected me and said this is Bluedicks' close relative known as Ookow.
A few days ago I posted photos of moths found in the rest rooms at camp.  They were beautiful!  Then yesterday a.m., there were none.  I suspected bug spray.  None this morning, either, in the men's room.  Then, accompanied by an assistant, I checked the ladies' room and found a large Polyphemus moth.  When they are this tame, the have usually eaten, mated, and laid their eggs, and are in the slow process of dying.  Sad, but they will become food or soil and life goes on.
The last photo is a particularly handsome specimen of Salsify, or Oyster Plant.  This non-native is fun to watch.  It opens every morning and closes every afternoon for weeks.  Then one morning it doesn't open.  It'll maintain the closed position for days at the ray flowers (petals) dry up and seeds form.  Then, one day the head burst open again revealing a huge puffball of seeds resembling those of dandelions but much bigger.  During this cycle of life, Salsify attracts its share of interesting insects.
There's a purple version in the Bay Area and Coastal Range.
I got a report of a beautiful Mountain King Snake - red, black and yellow - dead on the road.  Checked this morning for photo ops and it was gone.  I hope I can photograph a live one soon as they were undoubtedly recently born and are dispersing from their birthplaces.
Posted by Joe Willis at 3:53 PM