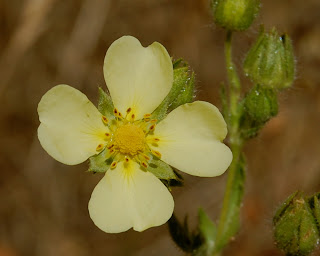 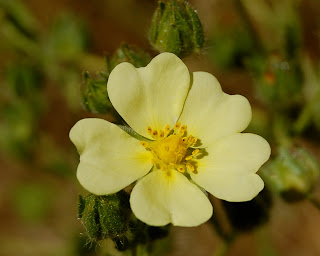 This concludes June's wanderings, another month in which I've managed to average more than one post per day.  There may be a few stories in June that I've left unfinished, so I'll review June's postings soon and rectify any oversights.
I almost titled this one something like "An Inverse Four-leaf Clover Experience," but that sounded a bit far-fetched.  But it does described the sensation I had when I stumbled across a common local species of Cinquefoil that had only four petals when I'm used to seeing them with five.   The name actually means 'five leaves,' but most species don't have five leaves.  In fact, there are a few species that have compound leaves each with five leaflets, but plant systematics is not the point here.  The point is that one of the delights of being a regular observer of nature's details is not only discovering patterns, but also discovering things that break the patterns - like a two-headed snake, or an albino something-or-other.  We are all familiar with the delight of discovering a four-leaf clover.  For me, it was just as delightful to find a four-petal Cinquefoil.  And to discover that my Spell Check doesn't recognize the word Cinquefoil.  Nor the word systematics.  I guess a title like "Spell Check for Dummies" would be redundant.
Posted by Joe Willis at 10:10 AM