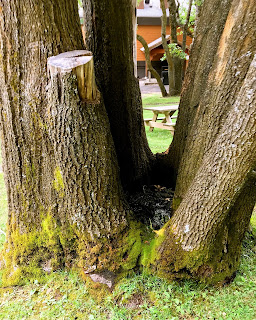 Not far from severe drought conditions all around the campus, we have watered lawns and the shade of some magnificent California Black Oaks.  As I walked by the one shown above, I was intrigued by the subdivided trunk and imagined suspending a treehouse 15 or 20 feet above the ground.  What a great reading place, especially if the platform were camouflaged.  So, I took a closer look. 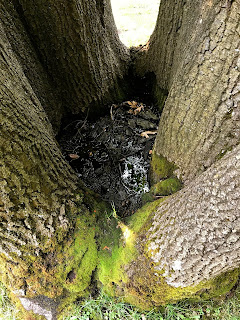 A sizable puddle.  Looked like an ideal spot for raising mosquitos, but who'd want to do that?  Maybe someone with an aquarium full of Gambusia, AKA Mosquitofish.

I have only a passing interest in mosquitos, based mostly on two things - their potential as vectors for many human diseases, especially in more tropical areas, and several horrendous mosquitos attacks I experienced during college days in Louisiana.
Several of us in the zoology department at Tulane U in New Orleans had been given permission to study certain ground-dwelling mammals on Avery Island, the location of Tabasco and a wonderful wildlife sanctuary.  E. I. McIlheny (the 3rd?) was a Tulane zoology major, so that was a great connection.  I remember setting Hav-a-hart (sp.?) live traps in a grid pattern over a large meadow in the sanctuary.  Lots of mosquito bites!  The next day while we were checking the traps, they were waiting for us.  A dense cloud of mosquitos attacked.  We worked very fast, screaming, swatting, swearing, then finally giving up and running for dear life, dropping traps along the way.  That was many years ago, so I can't remember how we resolved the situation.  Probably came back to collect traps when it was not prime time for mosquitos. And, I was not privy to whatever study my professor was involved in.  My true interest then was in reptiles, amphibians, and food flavored with Tabasco sauce.
Posted by Joe Willis at 11:04 AM