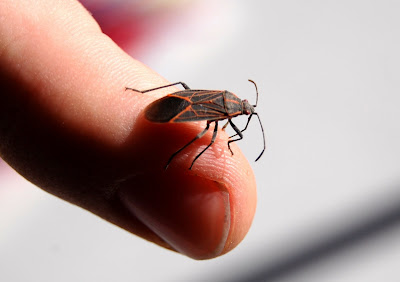 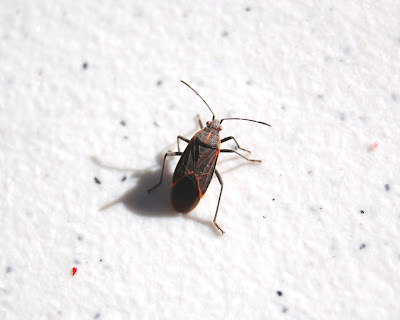 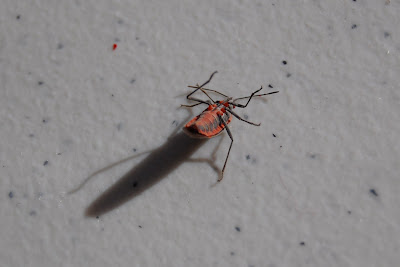 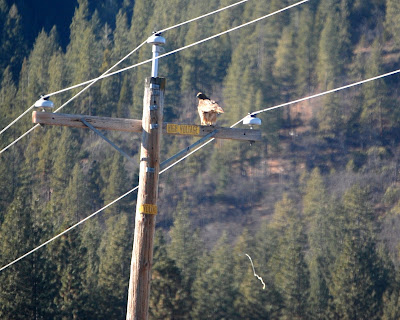 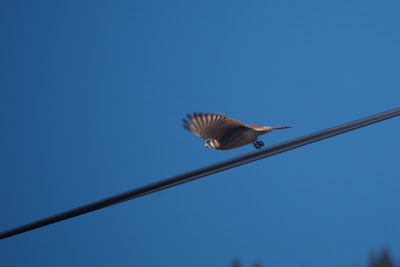 Another sunny, warm spell this afternoon and there was some animal activity to enjoy. Indoors, we found a couple of Box Elder Bugs, Boisea trivittata, that evidently noticed the heat and came out to play. We played. They spend the winter in the walls of the building and cause no harm. They can't bite. Ironically, I found some natural history information about them on the website of an exterminator and they did not recommend poisons! These look similar to the Red Milkweed Bug which is common around these parts in the summer.
On the way home, we did a little birding (strange verb, no?) along Stampfli Lane in Indian Valley. Actually hoping to see and photograph that Kingfisher I saw here the other day. No luck. But, we did see several Cooper's Hawks and had the privilege of seeing the one pictured above launch an amazing poop. The projectile in question is the long whitish object below and slightly to the right of the bird. Also saw a Kestrel perched on a wire and managed to get a photo as it took off. I'm not so good at photographing birds, especially while driving, but it was fun to see this activity in the middle of winter. Oh, in the morning, this same area sported large flocks of Lesser Canada Geese grazing in the fields, but they had relocated by the time we returned in the afternoon.
Posted by Joe Willis at 8:30 PM