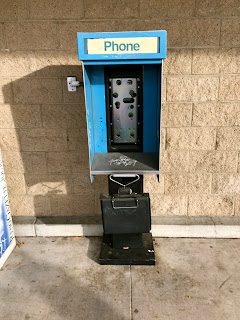 I've always been fascinated by phone booths, but they are disappearing.  See evidence above.  My high school history teacher and senior class advisor told us stories of his days as a hobo traveling by box car during the depression and how he found a way to steal money from pay phones without damaging them. My buddies and I tried the method and failed.  Fortunately we also failed to get arrested for attempted robbery.  I never did find out if our teacher's stories were true.
Around that same stage of life I used to love watching Rod Serling's Twilight Zone. In one episode a cowboy from the 19th Century was transported via a time machine to modern day New York City.  He arrived in one of those glass-enclosed phone booths with the accordion doors which were closed.  He didn't know how to open the door, so he panicked and smashed his way out and drew his six-guns on the sidewalk as he was also panicking by being surrounded by more people than he had ever seen back in the 19th Century.  A couple years after high school, I found myself in a phone booth in Florida during a warm, torrential rain.  There must have been several dozen tree frogs sharing the space with me.  It was weird, and I wondered why frogs would try to get out of the rain.  Must have been the perfect combination of temperature and humidity, and maybe density of mosquitos.  I could go on and on with phone booth memories, stimulated by my parking in front of the decommissioned phone booth in the above photo near Trader Joe's in Reno.  I felt really sad to see this, and I finally got motivated to take my first (and hopefully last) "selfie" with my iPhone.  I was a reluctant adopter of this technology, and still avoid getting addicted.  It's a tool to fulfill my obligations for family communication.  I even hate the word "selfie."  Just a few years ago it meant "an extremely selfish or self-centered person."  I guess there's probably some correlation between the meanings then and now.  It's late Monday night, and I look pretty sad posing by the disarmed phone booth, so I vow to post some sort of happy scene before bedtime.  Something related to natural history perhaps. 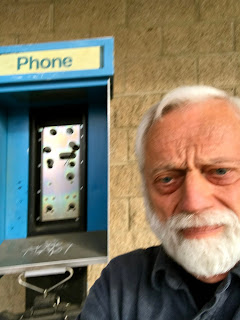